RSS
← A Favorite Video for Counselors! “STOP IT!”
Too Much Time with Technology? (Time for a Great Cartoon) →

Major Themes in the Book of Galatians (Ch. 4 Part 3)

Let’s look at the second half of Galatians 4 this morning.  We’ve already seen a couple of themes in this chapter, but please notice what Paul does now.  He gives us the example of Abraham’s two wives!  The story of Abraham and his two wives is told to us in Genesis 16. 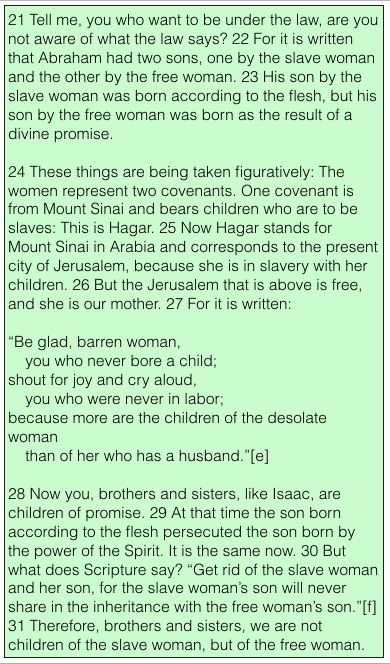 God has clearly promised Abram that he would have a son, even in his old age (Gen. 17). But 25 years passed and his wife Sarai wasn’t getting pregnant.  In Genesis 16 it is Sarai’s idea that Abram sleep with her Egyptian slave Hagar. Sarai even defends her advice by saying “The Lord has kept me from having children” (v. 2).

After ten years of living in Canaan, Sarai gives her Egyptian slave Hagar “to her husband to be his wife” (v. 3). Abram sleeps with her and she conceives.

In her pregnancy Hagar begins “to despise her mistress” and Sarai blames Abram “for the wrong I am suffering” (v. 5). She admits she put the slave in his arms, but add, “May the Lord judge between you and me” (v. 5).

Abram gives Sarai authority to mistreat Hagar. She does and Hagar flees. But the angel of the Lord finds Hagar and commands her to submit herself to her mistress and promises that the Lord will increase Hagar’s descendants “so much that they will be too numerous to count.” (v. 10).

The angel tells Hagar she will have a son and will name him Ismael “for the Lord has heard of your misery.” He will be a man who will live in constant hostility toward all his brothers. Hagar names the Lord “the God who sees me.” Ismael is born when Abram is 86 years old!

Was it of faith for Abram to sleep with Hagar?  for him to listen to Sarai and try to force God’s promise into fulfillment?  Or did God purposely wait until Abram was too old and Sarai too barren to fulfill His promise — so that all would know this was of God!?  We clearly have the contrast of that which was accomplished by “the flesh” versus that which was the result of “a divine promise.”

← A Favorite Video for Counselors! “STOP IT!”
Too Much Time with Technology? (Time for a Great Cartoon) →