RSS
← What a Surprise! A Free Cruise in Europe! Part 5 (final)
What Difference Does the Future Make? The Practical Application of Prophecy (Part 2) →

What Difference Does the Future Make? The Practical Application of Prophecy (Part 1) 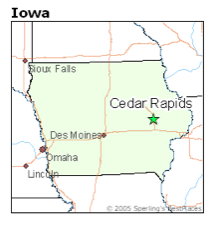 Friends — I’ve been invited to speak at Cedar Valley Bible Church’s annual “Second Coming Conference” (November 16-17). I spoke there two years ago and did a study entitled “From Here to Eternity: A Study of Heaven and Hell.”

For this year’s conference I’ve been working on the practical nature of prophecy. I’ve been impressed by how frequently prophetic material in the Scriptures often focuses upon how we should live now. I’ll be looking at three passages for the conference (and it may take several posts for me to think through what I want to say). Let’s look at the first text, I Thessalonians 4 — 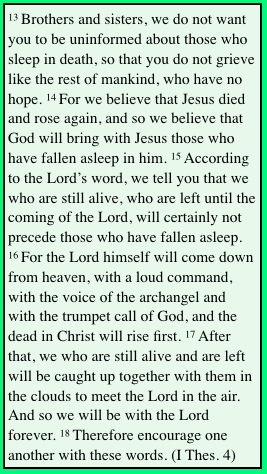 I see this passage as a great encouragement in light of the Second Coming of the Lord Jesus. Notice the challenge at the end of the passage: “Therefore encourage one another with these words“ (v. 18).

Instead of being an encouragement, the doctrine of the Second Coming has often led to believers’ wrangling with one another. Such in-fighting has probably actually discouraged some new believers!

What points of encouragement should we derive from this passage?
1. There ought to be a genuine care for those who have predeceased us (vv. 13-14). These believers were “uninformed” about those “who sleep in death.” Sleep in the Scriptures is often used as a metaphor for the death of a follower of Jesus (see Acts 7 where we read,  “While they were stoning him, Stephen prayed, ‘Lord Jesus, receive my spirit.’ Then he fell on his knees and cried out, ‘Lord, do not hold this sin against them.’ When he had said this, he fell asleep.” vv. 59-60).

Our Seventh-Day Adventist friends are wrong when they declare that we only sleep in the grave until the resurrection, that we have no soul or spirit that immediately goes to be with the Lord upon our death (see Phil. 1:20-25 and 2 Cor. 5:1-10 where we read that to be “absent from the body” is to be “present with the Lord”).

Have you been to a Christian funeral lately? Sometimes the celebration (accompanied by appropriate grieving) is, well, shocking! There is rejoicing that this believe is NOW with the Lord.

Paul’s concern here is that the Thessalonians thought that somehow those who died “in the Lord” would be at a disadvantage to those who would be still alive at the coming of the Lord. No! Their bodies will be raised up — to join the souls or spirits of those whom “God will bring with Jesus” when He returns (v. 14)! The predeceased are already with the Lord, but in a disembodied state (awaiting their new, glorified bodies). (to be continued)

← What a Surprise! A Free Cruise in Europe! Part 5 (final)
What Difference Does the Future Make? The Practical Application of Prophecy (Part 2) →