This is Part 5 and the conclusion of my response to David Bentley Hart’s article entitled “Why Do People Believe in Hell?” (found here). In this last post I want to continue to present my case for why Christians SHOULD believe in hell.

In our previous post we surveyed the gospel of Matthew to see what the Lord Jesus had to say about hell. He is — or should be — our final authority for what we believe. And His statements are unambiguous.

Is there a more unpleasant topic than eternal lostness? Of course not! Are we free to hold various views about the afterlife for those who die without Christ? Yes and no. Yes in the sense that we can believe whatever we want to believe. But such an exercise of our free will does not make us immune from the consequences of our beliefs. No, in the sense that if we profess to be Jesus-followers, we ought to follow Him in His teachings. And Hart’s position is a detour (“departure” might be the better word) in his discipleship, I would suggest.

If we assume (on good grounds) that God has made clear what we ought to believe about the afterlife, then holding a contrary position to the Scriptures, as John Stott once said, is foolish. He wrote, “Freedom to disagree with the Bible is an illusory freedom; in reality, it is bondage to falsehood.”  Stott also wrote: “If we come to Scripture with our minds made up, expecting to hear from it only an echo of our own thoughts and never the thunderclap of God’s, then indeed he will not speak to us and we shall only be confirmed in our own prejudices.” (Culture and the Bible).

There are many echoes in our culture, so holding to hell as eternal conscious punishment (ECP) is not, nor should it be thought of as, popular! That should not surprise us! 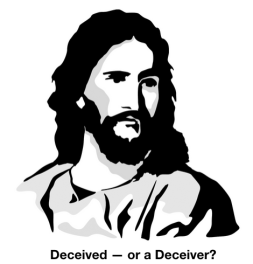 I suspect that Hart’s beef is not with Augustine or Calvin or other ECP believers, but with Jesus Himself. If it is unequivocally true that Jesus taught eternal conscious punishment, then Hart and the rest of us have a choice to make between two options. (1) Jesus was Himself deluded. He was “a man of his time” and shared some of the same pre-scientific misconceptions of his contemporaries. [This view eviscerates Christ’s deity, does it not?]; (2) Jesus purposely taught hell (knowing that it would not be eternal, nor conscious, nor punishment) to motivate people to faith. His warnings were merely hortatory (def. “urging to some course of conduct or action; exhorting; encouraging”). [In that case would He not be rightly thought of as deceptive?].

Those two scenarios are unsatisfying, to say the least. To suggest that Jesus was Himself deluded?! Or to imply that He purposely taught an un-truth in order to get people to believe?!

In conclusion, the testimony of the Lord Jesus about eternal lostness is clear. To reject what He said or to twist His words to fit an alternative theological theory is dangerous.

If it is a crime to shout “fire” in a crowded theater when there is no fire, how much more criminal is it not to shout at all when the fire is raging all around and people are asleep in their seats? The biblical Christian does not want to be alarmist, but he ought to be sounding the alarm!

Lessening the severity of hell or redefining its biblically declared nature is, in our opinion, more dangerous than outright denial. To promote the hope that hell will be a place of growth (rather than a place of groaning) is to twist the tenor and content of Christ’s teaching. Redefinition is more serious than total rejection, not only because the one doing the redefining appears to still be a member of the camp. Redefinition does nothing to change that which is being redefined; it only causes less caution to be taken in the face of a dangerous reality. A cup of poison relabeled Kool-Aid is not less lethal, only more enticing. (from The Other Side of the Good News).