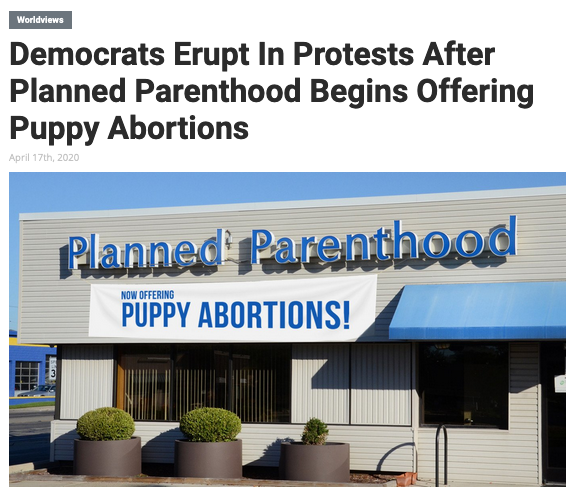 U.S.—Democrats have finally turned on Planned Parenthood after the organization announced its new puppy abortion program.

Many thought Democrats would defend anything and everything Planned Parenthood does, but it seems they’ve finally done something Democrats are willing to criticize: killing puppies in the womb.

The abortions for dogs are performed under the organization’s new “Planned Puppyhood” program. Planned Parenthood calls the program “Female Dog Healthcare” and says it is necessary for a dog’s health and emotional well-being. “Her litter, her choice,” the program’s slogan goes. “Kill puppies — no matter what.” They will also be selling aborted puppy parts to the highest bidder.

“This is outrageous!” shouted one protester at a Portland Planned Parenthood clinic. “Planned Parenthood is murdering precious little dogs, pretending that it’s just canine healthcare. They are participating in a modern-day holocaust that will end millions of cute little puppy lives. They are profiting off the murder of the unborn puppies. This is totally out of character for them! I can’t believe they would do something like this.”

Democrats say they will end their protests if Planned Parenthood agrees to go back to just killing human babies.