My 2nd edition of “Farewell, Rob Bell” is available!

This edition includes a review of Bell’s newest book

What We Talk about When We Talk about God.  I’ve also included some comments on Mark Galli’s (editor at Christianity Today) article on Bell’s book. 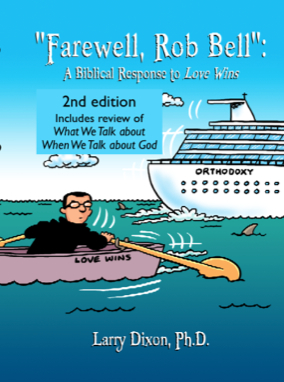 My book is available on Amazon by clicking here.

WHAT ELSE HAVE I BEEN UP TO?

We are loving grandparenthood!  I agree with the wag who said that grandchildren are God’s reward for not

killing your own children.  Our two-year-old grandson Ryland Dixon lives in Baton Rouge with his parents, our son Brian and daughter-in-law Julie.  Brian has started a charter school in Baton Rouge, Mentorship Academy, and we are quite proud of him.

Our two-month-old grandson Isaac is our daughter Amy’s and son-in-law Thom’s son.  They live here in Columbia and we look for any excuse to go see them. 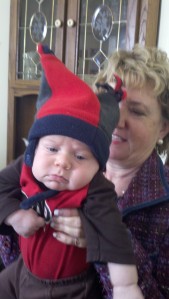 The Lord is good — and we are so thankful to Him for this stage in our lives.  One quick story:  Brian and Ryland were visiting with us the other week and our son was singing “With Jesus in the Boat we can smile at the storm” — and Ryland was filling in the word “boat.”  A few hours later, his aunt Amy tried to sing the song with Ryland.  He looked at her after she had sung the 1st line, waiting for him to say the word “boat,” and he said (rather indignantly), “DADDY BOAT!!!”

You have grandchildren?  Please feel free to add you comment below.  Have a great day!

Posted by Dr. Larry Dixon on November 3, 2011 in CHRISTIANITY TODAY

Thanks to all who have supported me in this publishing project, “Farewell, Rob Bell”:  A Biblical Response to Love Wins.  I especially appreciate the support of Ken Silva of Apprising Ministries.  This book is now available through Amazon.com.  There is also a Kindle version.  Allow me to repeat the flyer below which shows the cover (masterfully done by Christian cartoonist Ron Wheeler):

God’s given me courage to send a copy to Bell’s elders at Mars Hill Bible Church.  Please pray that some of them will read it and respond properly.

I’ve also sent a copy to Mark Galli of Christianity Today who says that Rob Bell and Love Wins are no litmus test of orthodoxy!  He’s publishing a book entitled God Wins.

Discussion Questions:  Why should we get in such a flap about a book on God’s love?  What makes neo-universalism so dangerous?

A Bell-Free Blog: What the Resurrection of Jesus Means to Me

“The resurrection is one of the most wicked, vicious, heartless hoaxes ever foisted upon the minds of men, or it is the most

fantastic fact of history.”  Today is resurrection Sunday.  What difference should the bodily resurrection of Jesus Christ make in my life?

I understand that the early believers did not greet each other by reciting recent sports scores, but by one of them saying, “He is RISEN!”   And the other responding, “He is risen INDEED!”  But why do we hear so few sermons on Christ’s resurrection during the year — and it seems to be the only theme on a Sunday like today?

Paul’s treatise on Christ’s resurrection in I Corinthians 15 is well-known.  That document alone demolishes foolish views like the disciples stole the body, or Jesus’ resurrection appearances were merely hallucinations, or the disciples went to the wrong tomb on that Easter morn.

I Corinthians 15 shoots down the silly notion that what really matters is that “Jesus lives in my heart” (which even the Jesus seminar member Marcus Borg says!).  Robert Funk, Borg’s predecessor, stated that the bodily resurrection of Jesus didn’t happen and that the body was most likely eaten by dogs.

Jesus’ bodily resurrection demonstrates the Father’s approval of the Son’s work, proves that Jesus kept His word about “taking back His life again,” and guarantees our own resurrections (for those who have trusted Him as Savior).   The evidences of the “almost-empty” tomb (the graveclothes were left), the resurrection appearances, and the bold preaching of the disciples in the very city in which their Master was executed reminds us that we have good and sufficient reasons to believe the Gospel — even at the

cost of our own lives!

Discussion Questions:  Why is the resurrection of Jesus important to YOU?  If you really believe He rose from the dead, what differences should that make in your life and mine?

Questions Evangelicals Need to Work on in Light of “Love Wins”

This vimeo is of the luncheon we had at Columbia International University after my talk (April 7, 2011) in chapel on Rob

Bell’s book “Love Wins.”  By my count — but I’m a preacher so numbers tend to be exaggerated — there were about 90-100 students who attended and there was some lively discussion on the questions I (and others) raised.

I will post two vimeos here.  The first is of our luncheon talk; the second (which was posted on this blog earlier) is of the chapel message.  The luncheon vimeo was recorded with my Shih Tzu Scrabble by my side.  His picture is here and you can hear him grunt approval of what I am saying.  If some of you want to record your grunts of approval — or disapproval — please feel free to do so!

Discussion Questions:  What issues are raised in this vimeo that you would put at the top of the list for Evangelicals to work on?  What makes those issues so important?

Please click on the link below for my review.  Always glad to get your comments.

IF ROB BELL IS NOT A HERETIC, I OWE HIM A BIG APOLOGY

I’ve called for Rob Bell to publicly repent of his universalism.  That call was not done prematurely.  I’ve listened to his full book (twice) on audio and am now reading the physical book itself.

I will be posting serial blogs as I work my way through the book.  I welcome comments because the issue of Evangelical Christianity versus universalism could not be greater!

My Comments on the jacket blurbs and Bell’s Preface:

One jacket blurb asks:  “What if the story of heaven and hell we have been taught is not, in fact, what the Bible teaches?”  Let me remind us that the crux of the issue is not personalities, but biblical teaching.

Several comments on his Preface:

Please don’t miss Bell’s clear statements that “Jesus’s story has been hijacked by a number of other stories, stories [that] . . .

have nothing to do with what he came to do.  The plot has been lost, and it’s time to reclaim it.” (vii-viii).  If I understand Bell up to this point, I’m being told that I have missed the whole point of Jesus’s coming, I’ve lost the plot of His story, and, worse than that, I’ve hijacked His story with my own.  Hmmm.  Could a mere human like you or me do something worse than that?

He says he’s written his book “for all those, everywhere, who have heard some version of the Jesus story that caused their pulse rate to rise, their stomach to churn, and their heart to utter those resolute words, ‘I would never be a part of that.’” (viii).  [I think for many of us, when by God’s grace we begin to understand our sin and the price Jesus paid to redeem us, our response would be:  “I could never have a part in that!”]

Ummm.  I think I’m a part of that. Because the “that” that’s he referring to is the viewpoint known as eternal conscious punishment.

Bell lays his cards on the table and says that “A staggering number of people have been taught that a select few Christians will spend forever in a peaceful, joyous place called heaven, while the rest of humanity spends forever in torment and punishment in hell with no chance for anything better.” (viii).  The emotive words “a staggering number” and “a select few Christians” and “no chance for anything better” leads one to respond:  “Yeah!  And they’ve been duped! And what kind of God would be that stingy and preferential and . . . and . . . stubborn and unmerciful?!”

He then points out that this belief is so central for many Christians that to reject it is to reject Jesus.  How ought we to respond to that?  Bell says, “This is misguided and toxic and ultimately subverts the contagious spread of Jesus’ message of love, peace, forgiveness, and joy that our world desperately needs to hear.” (viii).

Okay.  So I’ve hijacked the Jesus story and the story I give as His story is misguided and toxic and subversive.  I just want to understand where I stand.

Bell concludes his Preface by saying “My hope is that this [discussion] frees you.”  Jesus said, “The truth shall make you free.”

Only truth frees.  If Bell is wrong in his attack on what Evangelicals have been preaching, then the result will not be freedom, but slavery to something other than truth.

One last comment on Bell’s Preface:  He states clearly that “nothing in this book hasn’t been taught, suggested, or celebrated by many before me. . . . That’s the beauty of the historic, orthodox Christian faith.” (x).  He is identifying his teaching with the historic, orthodox Christian faith.  As we continue interacting with his subsequent chapters, we must ask, “Is he right?”

In a new book, Love Wins, Rob Bell appears to come out in favor of universalism, the view that all without exception will be saved.   The Bells were featured in a November 2004 Christianity Today issue on the Emergent Church.

Readers may be aware of Bell’s flirtation with universalism.  On pages 151-152 of Velvet Elvis (2006)  Rob tells the story of a stranger paying his bill for him at a restaurant. The waitress told him he had nothing to pay because it had already been paid.  “My acceptance of what [the waitress] said gave me a choice: to live like it was true or to create my own reality in which the bill was not paid.”  Here’s his explanation:

One blogger says, “This illustration is not Biblical. Rob’s illustration paints a reality where everyone is already forgiven (universalism) and whether you believe it or not, you owe nothing. But this is not Biblical. The Biblical teaching is that we are all guilty – we all owe a bill we can’t afford, and can never afford, and only if we repent and put our faith in Christ, essentially throwing ourselves at Jesus’ mercy, then and only then our bill is paid. But Rob teaches that our sin debt is already paid whether we believe it or not; whether we confess our sins or not; whether we repent or not.”

Justin Taylor of the Gospel Coalition has read some advance chapters and you can read his blog here.

Watch this video by Bell advertising his book and tell me what you think!

For any of you who follow my blog, my book The Other Side of the Good News: Confronting the Contemporary Challenges to Jesus’ Teaching on Hell, might be helpful.

Discussion Questions: How would you prove that universalism is a heresy?  What steps should be taken with Bell, do you think?