The Theology of Calvin . . . and Hobbes (Knowledge)

In his twisted way, Calvin defends being anti-knowledge! Fascinating that the Bible never condemns knowledge, although it does warn that “knowledge puffs up” (I Cor. 13). Many issues in life ARE clear and simple. And the knowledge that we are given in knowing the Lord ought to lead us to godly decisions and (sometimes) risky actions! 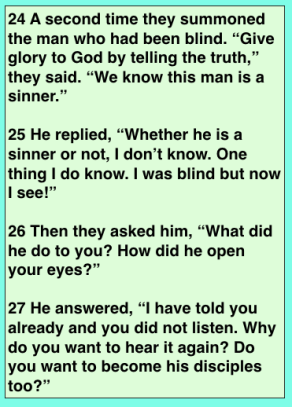 What do you KNOW? I mean, for sure?  Our culture seems to tolerate just about anything, except the certainty that truth can be known.  Our man born blind has just been put under oath (like sinful Achan in Joshua 7) and the Pharisees demand his opinion about Jesus.

In fact, they announce their view and expect him to agree with them.  “We know this man is a sinner,” they say.  Did they really expect him to reply, “Of course, you are right.  I can see that now!”

But he does not oblige.  He declares in

unmistakable terms what he doesn’t know and what he does know.  “Whether he is a sinner or not, I don’t know.  One thing I do know.  I was blind but now I see!”

What do you know?  Say it!  Say it clearly.  Say it with all your conviction. But say it!

And don’t let the religious turkeys get you down!

G. K. Chesterton declared the following: “But what we suffer from today is humility in the wrong place. Modesty has moved from the organ of ambition. Modesty has settled upon the organ of conviction; where it was never meant to be. A man was meant to be doubtful about himself, but undoubting about the truth; this has been exactly reversed. . . . We are on the road to producing a race of men too mentally modest to believe in the multiplication table.” (G.K. Chesterton, Orthodoxy, pp. 31-32). (to be continued)