Seven Critical Challenges for Living in This World (A Study of I Peter 2): Living Right?

Some of you are aware that I’ve been engaged in a daily Bible reading program with my friend Frank in New Jersey for a couple of years or so. We choose a book of the Bible and read the same chapter each day for a week — then move on to the next chapter after that. Our procedure is quite simple and is explained here.

Well, I’ve started a small group of four men who are doing this kind of daily Bible reading and we’ve worked our way through Philippians and I Timothy, and are now going through I Peter. We drop each other a short email on Sunday about something we’ve learned in our reading together.

In reading through I Peter 2, I believe there are seven critical challenges that Peter gives us that are particularly relevant for us right now in our world. Here’s the fourth —

How we believers live our lives is critical in our witness for Christ! It is not enough that we behave ourselves before the family of God. We live in a world watching us, accusing us, challenging us.

Nowhere in the Bible are followers of the Lord commanded to go live in caves and isolate themselves from the pagans of this world. We are to “live among the pagans” (v. 12). That is, our lives are to be visible and either commendable or condemnable by those who aren’t yet in the family of God. The reason we are to live such good lives is not primarily that they would be ashamed of their groundless slander of us believers, but that they would “glorify God on the day he visits us.” And only those who have trusted Christ can properly glorify God, right? The way we conduct ourselves in this world can directly affect others’ coming to know Christ.

Today’s Challenge: What are pagans saying about your life? Do they notice that your values are different, your choices are praiseworthy, your behavior is worth imitating? If not, why not?

Friends: If you’re a regular reader of my blog, you know that my friend Frank (in New Jersey) and I have been doing an email Bible study for over a year. We read the same chapter every day for a week — and then send a brief email of encouragement to each other. We’ve completed most of the epistles of the New Testament — and it’s been a great discipline for both of us.

We’re now working our way through 2 Corinthians. Here’s my outline for several verses in chapter one:

2. Our behavior ought to be confirmed by our consciences (v. 12).

3. Our behavior among other believers is critical (v. 12)

>> “with integrity and godly sincerity”

5. We want to be clear in what we communicate with other believers (v. 13).

Today’s Challenge: Are you and I behaving ourselves in the world? The world is watching us!

A Sermon on I John: Why Should We Behave as Believers? Part 2

A Message on I John: Why Should We Behave as Believers? (Part 1)

This is our last post on our study of I Timothy 3. We are looking forward to our trip to New Jersey, September 28 to October 7. For our Sunday School on October 6 we will be looking at the 2nd half of I Timothy 3. Let’s look at our passage one last time  — 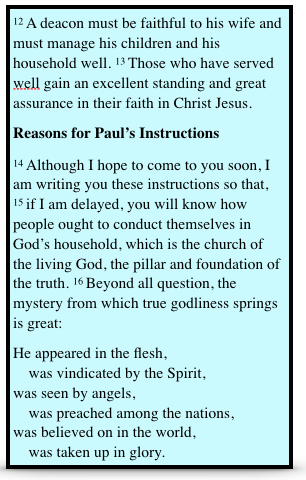 Verse 16 concludes this chapter and Paul’s instructions about overseers, deacons, deaconesses, and behavior in the “household of God.” And what a marvelous concluding verse it is! Here’s what we read:

“Beyond all question, the mystery from which true godliness springs is great: He appeared in the flesh, was vindicated by the Spirit, was seen by angels, was preached among the nations, was believed on in the world, was taken up in glory.”

If that doesn’t sound like an early Christian creed, I don’t know what would be! The editors of the NIV (and other translations) center the 2nd half of this verse, indicating that it was perhaps a commonly-used statement of faith which believers recited! Here’s my suggestion concerning these six great affirmations:

Tags: behavior, doctrine, I Timothy 3, pillar and foundation of the truth, the church

Getting ready for our trip to New Jersey, September 28 to October 7. I get to teach Sunday School at Cedarcroft Bible Chapel on both September 29 and October 6.

A few observations as we begin thinking through this second part of I Timothy 3:

1. Paul has returned to the topic of deacons (vv. 12-13). Leadership matters in the local church — and deacons are not just table servants (as some interpret Acts 6).
2. Paul then gives his reasons for instructing these believers — they need to know how to conduct themselves in God’s household (v. 15).
3. He then provides one of the earliest creedal statements in all of Scripture in verse 16. He is speaking of the “mystery” from which true godliness springs. And that “mystery” is none other than Christ — incarnated, resurrected, preached, believed on, and glorified!

could Paul have for instructing us how to behave ourselves in the church than the Person and Work of the Lord Jesus?

Thank the Lord today for the solid foundation we have for conducting ourselves properly among God’s people! (to be continued)

Becoming Like Your Parents — Time for a Great Commercial!

Getting Ready for My Next NJ Trip! (Part 1)

I will be preaching at

Cedarcroft Bible Chapel in New Jersey on March 31st and April 7th. I will also be teaching Sunday School on both Sundays. When I was there last (Feb. 26-March 4), we looked at the topic “Why Should We Believe Anything at All?” For these two Sundays we will look at the subject “Why Should We Behave as Believers?” We will be studying Titus 2:11-15 on March 31st and 2 Peter 1:3-11 on April 7th.

The truth is we are being watched — and we had better behave ourselves!

The Scripture we will look at on March 31, Titus 2, is filled with challenges to live for Christ because of God’s grace! Here is that passage:

As you look at that amazing text, what is one reason you see there to encourage believers in Jesus to live godly lives? (Feel free to leave a comment below).

I am beginning a new series of messages at Crossroads Fellowship Church in Augusta,

Georgia, where I have been serving as interim pastor for the last 10 months.  There will be four sermons, but I want to work my way slowly through this “minor prophet’s” book.

Although there has never been a more reluctant missionary than Jonah, the book gives us much more than simply his running away from God or just a story of his being swallowed by a sea creature.  His story is really verbal orthodoxy being contradicted by behavioral heterodoxy.  He seemed to believe the right things.  But his life did not reflect his professed faith.  Which is a condition, I suspect, which characterizes most (if not all) of us.  Let’s begin looking at chapter one of Jonah and make some observations: 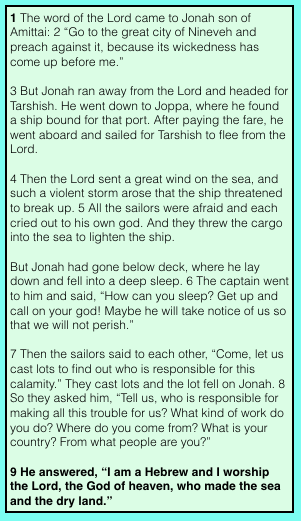 What do we know about the person Jonah?  We learn in 2 Kings 14:

23 In the fifteenth year of Amaziah son of Joash king of Judah, Jeroboam son of Jehoash king of Israel became king in Samaria, and he reigned forty-one years. 24 He did evil in the eyes of the Lord and did not turn away from any of the sins of Jeroboam son of Nebat, which he had caused Israel to commit. 25 He was the one who restored the boundaries of Israel from Lebo Hamath to the Dead Sea, in accordance with the word of the Lord, the God of Israel, spoken through his servant Jonah son of Amittai, the prophet from Gath Hepher.

It seems probable that Jonah was a disciple of Elisha and succeeded him as prophet. He lived during the reign of Jeroboam II and was a statesman in the northern kingdom of Israel.

We read that “the word of the Lord came to Jonah . . .”  God commissions him for a task.  If you are a Jesus-follower, you have been commissioned for a task.  What would you say is your TASK for today?  (to be continued)