The Theology of Calvin . . . and Hobbes (Being Cool)

The Theology of Calvin . . . and Hobbes (Novelty)

“Surely it must be a sin to bore God’s people with God’s Word!”  That quote from my Canadian friend Dr. Daryl Busby of years ago illustrates our culture’s need not to be BORED! But is novelty the answer? Of course not! We who preach and teach must do so enthusiastically, convinced that God’s Word is what everyone needs to hear! And His Word is no flash in the pan!

This commercial cracks me up! I worked for years co-teaching a course for counseling students (with my friend Al McKechnie). I’ve known a few “classic narcissists”! You?

Bored! (Time for a Great Commercial)

Don’t you love the logic of this commercial? But BOREDOM is a major problem for our TV-saturated, social-media marinated culture.

That’s why we need to be in God’s Word. Daily.

FORT WAYNE, IN—According to sources close to local boy Michael Jacobs, the 8-year-old kid reported he was “bored” after school Monday, even though he was surrounded by more luxuries and abundant resources than even royalty had just 100 years ago.

“There’s nothing to do,” he said, his eyes glazing over as he stared at a mountain of electronics, games, and entertainment devices specifically designed to ensure he stayed engaged at all times.

Jacobs also reportedly pointed out that there was nothing to watch on Netflix, Amazon Prime, Hulu, and YouTube, even though kings and queens of ages past who felt lucky to go to a playhouse from time to time would have been flabbergasted at the sheer number of entertainment options available to him. The boy browsed through the catalogs of various streaming services on one of the family’s eighteen streaming devices before declaring every single show that catered to his exact demographic was “lame.”

Sources claim Jacobs’ parents then suggested he play one of the hundreds of video games he had accumulated over the years, but the youth reportedly replied that he would need to acquire a new game if he was to remain entertained for more than a few minutes.

“Those games were exciting when I first got them, but now they’re just boring. Uggggh, there’s nothing fun around here,” he told them, according to witnesses.

At publishing time, Jacobs had wandered over to the cupboard and stared miserably at a larger quantity and variety of foodstuffs than princes of past centuries ever could have dreamed of, and declared there was “nothing to eat.”

This is one of our five grandsons, Jeremiah. His mother takes a lot of pictures. And he was done. Finished. Didn’t want to pose for any more photos. Bored with it all.

Little did he suspect that his grandfather would use his picture as an illustration of boredom — the sin of our times.

I guess we all get a bit bored from time to time. But a constant state of boredom (which is definitely not Jeremiah’s situation) is spiritually criminal. There is so much to learn in God’s Word! Let’s show the world that we are NOT bored and that the greatest thing that has ever happened to us is salvation in Jesus!

Bored? Some Satire from the Babylon Bee 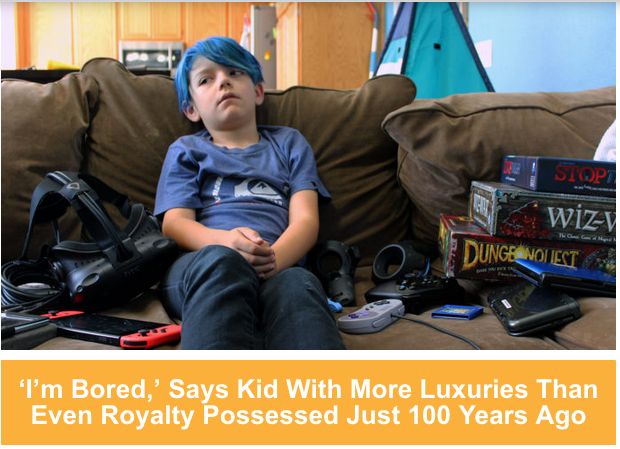 Time for a Great Cartoon! (Boredom)! 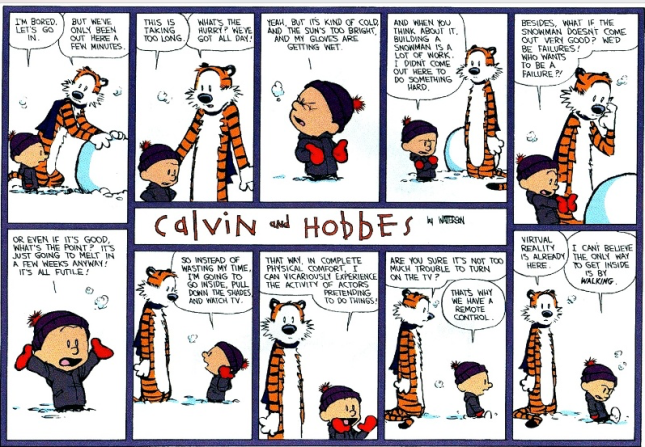 Time for a Great Cartoon: Boredom, Virtual Reality, and Laziness

No real need for commentary, right?

Time for a Great Cartoon! (boredom)

What a great illustration of many people today!  Boredom seems to be the malady of our culture.  In Calvin’s pea brain, it’s easier to fritter one’s life away watching actors pretending to do things.

The term ennui is defined as: “a feeling of utter weariness and discontent resulting from satiety or lack of interest; boredom.”  Calvin is thoroughly infected by ennui.  What I find really sad is the bored believer.  This is the Christian who has no goals, no dreams, no aspirations for Christian growth.  Everything wearies this person.  He or she blames everyone for their lack of growth, their stagnation in spiritual things.

As someone has said, “The cure for boredom is CURIOSITY.  There is no cure for curiosity!”  What are you curious about as a believer?