We began this series with a quote from Karl Barth who said that people come to church out of the expectancy that they could find the answer to the question ‘IS IT TRUE? IS IT REALLY TRUE?”

If the gospel of Jesus Christ is really TRUE, then certain conclusions follow. The conclusion we want to look at today is . .

We have a message for the world, a message which is both good news and bad news.

The “gospel” means good news. Is the gospel good news to you? IF the gospel is true, then it is the best news anyone could ever hear — forgiveness from the Triune God! A place in God’s family! A reason to live! A confidence about the afterlife! But the gospel isn’t only good news. [The first book I wrote is entitled The Other Side of the Good News].

What’s the bad news of the gospel? Eternal judgment. Separation from God and God’s people forever. Righteous condemnation. Eternity in hell. There is no worse news than that!

One biblical text has always gripped my attention. It’s found in 2 Corinthians 2 —

Please notice the olfactory emphasis in this text. We are an aroma. We smell. To some we smell great. To others, not so much. Our job is to “spread the aroma” of Christ everywhere.

Although I have great reservations about the theology of Karl Barth, I agree with what he said when he stood before a congregation for the first time in his life. He said, “Expectancy – that’s why they were there, why all of us were. At that strange, still moment just before the show starts. It is above all else expectancy that throbs in the stillness like a pulse. All those people out there in the pews, some hostile, some searching, some both at once, some young, some old. Their being there points to the event that is expected or appears to be expected or at least, if the place be dead and buried, was once expected there. . . . The event they await so expectantly is the sermon itself and which, whether they recognize it or not, they, all of them, want to find the answer, to one question beyond all other questions, which is the question, ‘IS IT TRUE? IS IT REALLY TRUE?”

The question I want to pose in this series of posts isn’t is the gospel true, but IF IT IS TRUE, WHAT THEN? The question IS IT TRUE is, of course, fundamental and absolutely critical. As C.S. Lewis once put it, “If Christianity is untrue, then no honest man will want to believe it, however helpful it might be; if it is true, every honest man will want to believe it, even if it gives him no help at all.” (God in the Dock: Essays on Theology and Ethics). A great message on “What Is the Gospel?” by D.A. Carson is found here.

But my assumption in these posts is that the gospel indeed is true. And my purpose is to ask what difference that makes? Some of the issues I want to consider are as follows.

We have both good news and bad news the world needs to hear. (forgiveness and judgment). We are news-bearers. Are we a fragrance or a stench? Or both?

We have a justification to be kind but clear when it comes to any other worldviews or religions. Does this or that religion help me live in God’s world? We are not to fear, but can compassionately confront alternative worldviews.

We have every reason to make the Bible our absolute guidebook for life. There are a number of inadequate pictures of the Bible which seem to dominate Christian thinking. But what is the Bible? Really?

We desperately need the people of God, the church. For many the church is the great Evangelical option. “I’ll go if I have time.” “I’ll give if I can spare some loose change.” “I’ll serve if I have to.”

We can honestly face the suffering in the world without becoming cynical or callous. We will think through the book Why a Suffering World Makes Sense and draw certain conclusions about real, but temporary suffering in this broken world.

We are able to be supernaturally joyful despite the challenges of this fallen universe. What is true joy and how is it expressed in a seemingly progressive depressed world?

We can be biblically optimistic about the future because our God is sovereign.

Five Truths You Need to Believe about . . . An Introduction to the Series

Introduction to the Series:
These posts are in preparation for my writing a series of 30-page booklets which will be designed to teach and apply fundamental truths of the Christian faith. While they do not pretend to address all the issues in a particular area of Christian belief, they will cover some of the basics which every Jesus-follower should affirm and put into practice.

Theology — the study of God and the things of God — is, for most people, as attractive as an appointment for a root canal. But I have often said that “Theology is not boring. Theologians are boring!” The precious truths given to us by a loving and powerful God should excite us and empower us to live for Him. Spiral bound, these lay-flat booklets will provide space for study notes and exercises.

Unfortunately, many Christians look like they’ve been baptized in lemon juice. Some act as if, when they came to Jesus, He gave them a misery pill and told them to go out and medicate the world!

Professional Christians (pastors, missionaries, Bible college and seminary professors) often seem to reflect the idea that doctrine is boring or irrelevant. Listen to what Dorothy Sayers said about such ministers:

“It is not true at all that dogma [doctrine] is ‘hopelessly irrelevant’ to the life and thought of the average man. What is true is that ministers of the Christian religion often assert that it is, present it for consideration as though it were, and, in fact, by their faulty exposition of it make it so. The central dogma of the Incarnation is that by which relevance stands or falls.” (from Creed or Chaos).

We will show the biblical basis for each of the five truths we will discuss in each of these booklets. We will also take seriously the “So what?” factor. In other words, if I really believe X, what difference ought that to make in my life? Right here? Right now?

So, we will list and discuss the five truths about a particular area of Christian belief, investigate some of its practical implications for the believer, and recommend several resources for further study.

Today’s Challenge: Ask yourself the question: Do you really believe the fundamental truths of the Christian faith? How can your beliefs be tested and lived out? 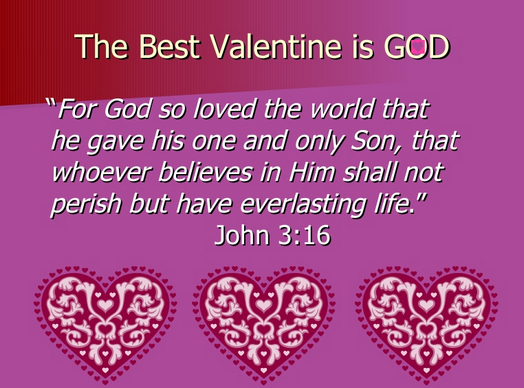 A Great Political Message! (A quote from Nate Bramsen) 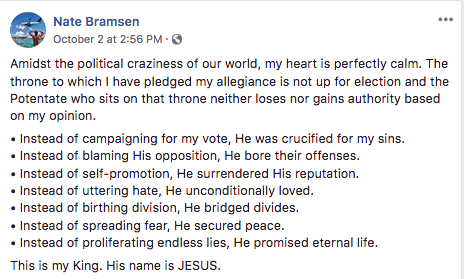 Posted by Dr. Larry Dixon on October 9, 2018 in Uncategorized

Time for a Great Quote: Michael Horton on Christianity Is More Than Loving Others! 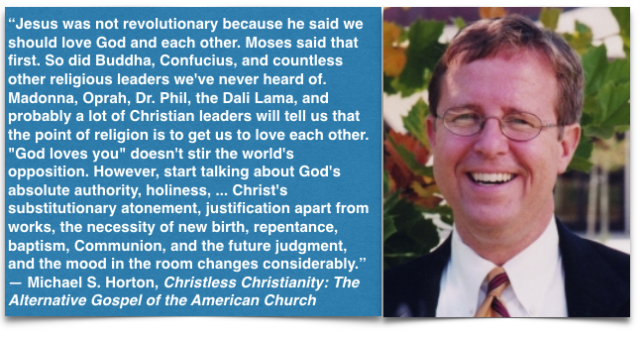 Posted by Dr. Larry Dixon on September 23, 2018 in christianity

Time for a Great Tozer Quote: The God of Modern Christianity 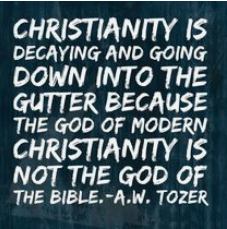 Posted by Dr. Larry Dixon on August 31, 2018 in christianity

This incredibly talented man, who passed away in 2004, was blind in two ways. He lost his sight as a child to glaucoma. But, if he held to this quote till his death, he was spiritually blind to the specificity of the Christian gospel.  Granted, denominations save no one.  But the gospel of Jesus Christ rules out Judaism and Islam.  And self-defined religion.  Any comments?

8 Signs Your Christianity Is Too Comfortable

Please click on the link below for a challenging article!

Time for Some Great Quotes (G.K. Chesterton on Love and Christianity) 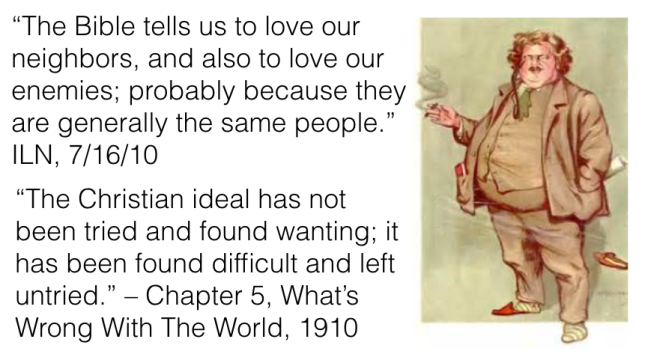