The Theology of Calvin . . . and Hobbes (Relationships)

God was pleased with His creation, Genesis 1 tells us. He saw all that He had made — all the creatures and man — and “it was good.” Then God saw something that He described as “not good” (Gen. 2:18). It was not good for man to be alone. He needed a counterpart — so God created Eve.

Man — alone??? He had GOD! He had a perfect relationship with his Creator. But Adam needed a human companion. He needed relationships with other humans. And so do we.

In our section for today we have a brief report about the ongoing war between the house of Saul and the house of David. We are told that this conflict “lasted a long time.” The forces of David become stronger and stronger while the army of Saul grows weaker and weaker.

Families are important and we are informed about the sons that David has. Six sons are listed: Amnon, Kileab, Absalom, Adonijah, Shephatiah, and Ithream. And each was born to a different mother! This text tells us that David had six wives!

This raises a critical question about polygamy! Was it ever God’s intention that a man should have more than one wife? Not if we carefully read the Genesis account of Adam and Eve.

But there is no overt condemnation of having more than one wife in the Old Testament, is there? In fact, after David commits his great sin against Bathsheba and her husband (in 2 Sam. 11), Nathan the prophet says to David, “This is what the Lord, the God of Israel, says: ‘I anointed you king over Israel, and I delivered you from the hand of Saul. 8 I gave your master’s house to you, and your master’s wives into your arms. I gave you all Israel and Judah. And if all this had been too little, I would have given you even more. 9 Why did you despise the word of the Lord by doing what is evil in his eyes?” (2 Sam. 12).

I found the following article from CARM (Christian Apologetics and Research Ministry) helpful:

God allowed polygamy (as well as diviorce) in the Old Testament because of the hardness of people’s hearts (Matt. 19:8). God never approved of polygamy nor did he intend it to be the norm. In fact, he specifically said not to have more than one wife because, in part, they can turn a person’s heart away from God. Deuteronomy 17:17, “He shall not multiply wives for himself, or else his heart will turn away; nor shall he greatly increase silver and gold for himself.” Nevertheless, God permitted polygamy, just as he permits people to do other sinful acts.

The standard that God established in the Garden of Eden was monogamy, one man and one woman. Genesis 1:27, “God created man in His own image, in the image of God He created him; male and female He created them.” God did not create multiple people, but only one man and one woman and from them, in that bond of marriage, was the means to have families and fill the earth. God goes on to say in Genesis 2:24, “For this reason a man shall leave his father and his mother, and be joined to his wife; and they shall become one flesh.” This principle is in the New Testament as well.

Matthew 19:4–5, “And He answered and said, “Have you not read that He who created them from the beginning MADE THEM MALE AND FEMALE, 5 and said, ‘FOR THIS REASON A MAN SHALL LEAVE HIS FATHER AND MOTHER AND BE JOINED TO HIS WIFE, AND THE TWO SHALL BECOME ONE FLESH’?” 1 Corinthians 7:2, “But because of immoralities, each man is to have his own wife, and each woman is to have her own husband.”
Ephesians 5:31, “FOR THIS REASON A MAN SHALL 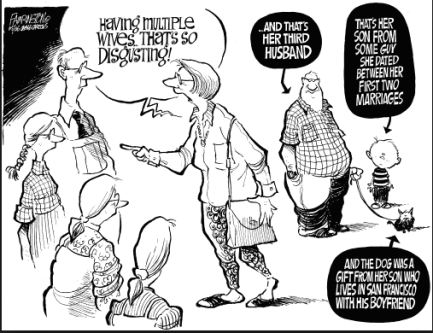 LEAVE HIS FATHER AND MOTHER AND SHALL BE JOINED TO HIS WIFE, AND THE TWO SHALL BECOME ONE FLESH.” 1 Timothy 3:2, “An overseer, then, must be above reproach, the husband of one wife, temperate, prudent, respectable, hospitable, able to teach . . .”

Conclusion:  So, polygamy was permitted by God in the Old Testament but it was not his design. It often leads people astray and caused dissension within households where multiple wives are present. it is not properly represent the relationship between Christ and his bride the church (Ephesians 5:25-27). He does not have multiple brides, he has one bride.