Focus! Keeping Your Eyes on Jesus in a Near-Sighted, Distracted World! (The Blind Man in John 9 – Part 15)

With these verses our study of this most extensively described miracle in all of the Bible comes to a close. The man born blind has been healed. He has been tossed out of the synagogue. He has been insulted and excommunicated. All that remains is a proverbial “moral of the story.”

In this series of blog posts on FOCUS I want to examine my own vision and ask if my spiritual eyesight is getting dim, distracted, or damaged by choices I make. We will be looking at a number of key biblical passages which emphasize this sense of sight. I am particularly looking forward to pondering the healing miracles which turned blind people into sighted people. 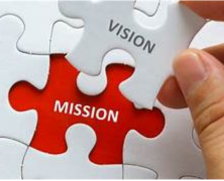 Jesus’ Mission: There are several places where Jesus declares why He came. For example, in John 10:10 Jesus says, “The thief comes only to steal and kill and destroy; I have come that they may have life, and have it to the full.” In John 12:47 Jesus says, ““If anyone hears my words but does not keep them, I do not judge that person. For I did not come to judge the world, but to save the world.” However, here at the end of this great miracle, Jesus says, “For judgment I have come into this world, so that the blind will see and those who see will become blind.” (v. 39).

His coming, according to this text, involves two purposes: (1) “so that the blind will see” (which has happened in two ways to the man born blind), and (2) so that “those who see will become blind.” The blindness of the religious leaders of Israel could not have been made plainer than here in the story of this healing. 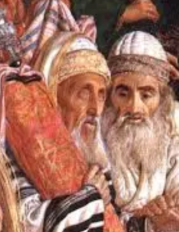 An Outraged Question: Some of the Pharisees heard Jesus say this and they respond, “What? Are we blind too?” (v. 40). The Greek reads: 40 ἤκουσαν ἐκ τῶν Φαρισαίων ταῦτα οἱ μετ’ αὐτοῦ ὄντες, καὶ εἶπον αὐτῷ· Μὴ καὶ ἡμεῖς τυφλοί ἐσμεν; Literally, this sentence is translated as: “The ones from the Pharisees who were being with him (presumably Jesus) heard these things, and said to him: ‘Surely we also ourselves are not blind men, are we?”

The way they word their question contains that negative mē we touched on before in one of our posts. What they are really asking is this: “Surely we are not blind too, are we?” Their question is one of outrage, thinking that Jesus is somehow lumping them in with the man who, in their opinion, was “steeped in sin at birth.” Their question, in the way it was worded, expected a negative answer. They expected Jesus to respond with something like, “No! Not at all. I’m certainly not implying that you Pharisees are blind!”

It is interesting that their question implies that the man born blind is still blind! They refuse to acknowledge that he has been healed.

Jesus’ Authoritative Conclusion: The last statement in this miracle story is Jesus’ response to these Pharisees. He says, “If you were blind, you would not be guilty of sin; but now that you claim you can see, your guilt remains” (v. 41). So this miracle account is about much more than a man born blind receiving his physical sight. This story is about sin and guilt and claiming to see and actually being blind.

I believe what Jesus is saying to these religious leaders is quite stark and direct: “If you were blind — and you’re not! — you would have an excuse for your refusal to believe in me. The fact is, you claim you can see, but you don’t see your own guilt which is right in front of you!”

By the way, this miracle is referred to once more in the gospel of John. In the very next chapter the Jews accuse Jesus of being demon-possessed and some respond, “These are not the sayings of a man possessed by a demon. Can a demon open the eyes of the blind?” (Jn. 10)

Today’s Challenge: Would you say that your spiritual blindness has been healed by the Lord Jesus? If so, will you pray that God would lead you and me to more clearly FOCUS on Him and what He wants to do in and through us?

Focus! Keeping Your Eyes on Jesus in a Near-Sighted, Distracted World! (The Blind Man in John 9 – Part 14)

Being kicked out of the synagogue was about the worst thing that could befall a Jewish person. And these religious leaders threw the man born blind out! Being excluded from the center of religious life meant, to many, that one was under the judgment of God. What the man born blind’s parents feared has happened to him.

In this series of blog posts on FOCUS I want to examine my own vision and ask if my spiritual eyesight is getting dim, distracted, or damaged by choices I make. We will be looking at a number of key biblical passages which emphasize this sense of sight. I am particularly looking forward to pondering the healing miracles which turned blind people into sighted people.

Sought Out by the Savior: We read that Jesus heard that the man born blind had been thrown out of the synagogue. And He seeks him out. Jesus doesn’t say to the man, “I’m really sorry for the third degree you had to endure!” Or “How’s it going with your vision?” No. Jesus goes directly to the most important point of all: “Do you believe in the Son of Man?” (v. 35).

The expression “the Son of Man” was a Messianic title. “Any Bible reader will instinctively recognize that all this takes its place in the larger sweep of Messianic expectation that finds its fulfillment in Jesus the Messiah, the uniquely qualified divine-human king. And in fact Jesus himself confirms this for us, explicitly associating himself with Daniel’s “son of man” (Matt. 26:63–64). This is in fact his favorite self-designation, recurring some eighty times in the Gospels, and becomes on his lips a Messianic title. Jesus is the Son of God. He is also the Son of Man.” (https://www.thegospelcoalition.org/essay/jesus-christ-son-man/).

A Direct Claim of Messiahship: The man born blind asks who the Son of Man is so that he can believe in him. Jesus declares, using third person language, “You have now seen him; he is the one speaking with you.” I’ll bet the word “seen” meant a lot to this man who had been born blind! Jesus is saying, “He is standing right in front of you — and you can see Him!”

A Logical Response: We read that the man said, “‘Lord, I believe,’ and he worshiped him.” (v. 38) Worship is the natural response of personal faith in Jesus. While the religious leaders of Israel rejected Jesus, this man, this one “steeped in sin at birth,” worshiped Him!

Today’s Challenge: Are you worshiping Jesus as the promised Messiah? Faith is not mere intellectual assent. Faith shows itself by worship. How might you express your worship of the Lord Jesus today?