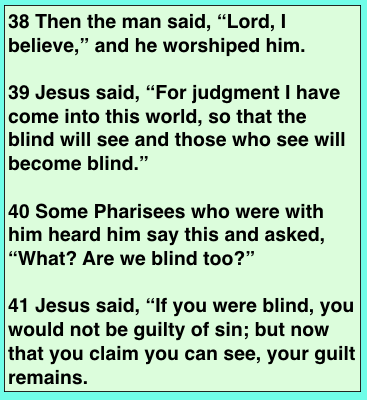 Man can choose not to be rescued.  In his rebellion, he can blame God, ignore God, and even hate God.  Proverbs 8:36 says, “But those who fail

to find me harm themselves; all who hate me love death.”

But God allows rebellion, and the Pharisees hear Jesus saying that He had come into the world for judgment.  The Pharisees think they are judging Him, while the opposite is the truth!

“What?  Are we blind too?”  Apparently they still saw the man born blind as a man who was still blind.  The construction of their question is such that they are expecting a “NO!” answer:   “We’re not blind too, are we?”

I love how the Lord Jesus let people come to their own conclusions.  He doesn’t answer their question “Yes!” or “No!”  But He says, “If you were blind, you would not be guilty of sin . . .”  So, in one sense, they were not blind.  Is Jesus saying that one’s ignorance of one’s sin means one is not guilty of sin?  (to be continued — and finished!)

Posted by Dr. Larry Dixon on April 29, 2017 in spiritual blindness 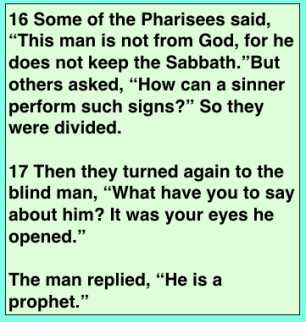 Presuppositions.  A fancy word which means an implicit assumption about the world or a background belief relating to an utterance whose truth is taken for granted in discourse.  Whew!  Everyone has presuppositions.  We assume that everything we believe is correct — or else we wouldn’t believe it!

The Pharisees, like us, had a lot of presuppositions.  They assumed they were entirely correct in their view of the Sabbath and their view of Jesus.  But before them stands a man who is looking around for the first time in his life.  He’s starting fresh.  All his assumptions and presuppositions have been radically altered by one act from this “sinner” — Jesus.

Frustrated that their inquisition isn’t helping

them in the least, they put the man born blind on the spot again and add an ingredient to the dispute, an ingredient that worked well for the Pharisees — GUILT!

“What have you to say about him?  It was your eyes he opened.”  No situation is too difficult or complicated that a little guilt can’t be added to it!  “You started this!  Your blindness caused Jesus to work on the Sabbath!  What do you have to say for yourself?”

But the man born blind “hasn’t got time for the . . . guilt” (to borrow the words from an old Carly Simon song).  He declares about Jesus “He is a prophet.” Oops.  Wrong answer.  And the dialogue will continue to seriously degenerate in the next few moments. (to be continued) 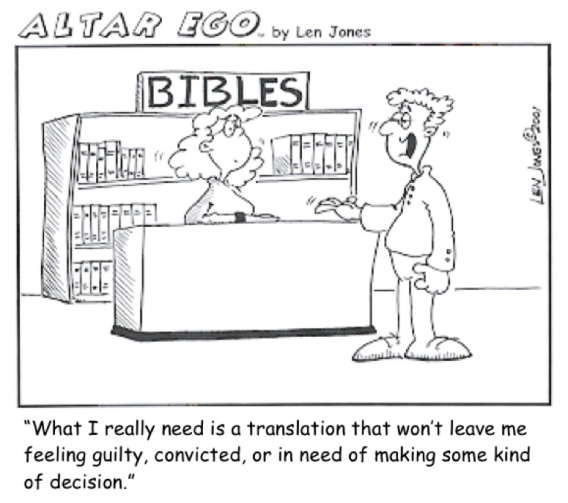 Posted by Dr. Larry Dixon on June 19, 2015 in bible translations 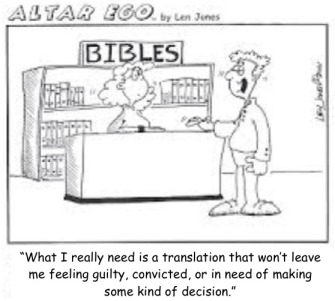 “I know a little Greek — his name is Guido!”

My, how easy it is for all of us to want such a Bible!  When I was a freshman in Bible college (shortly after all the dinosaurs had become extinct), I remember listening to one of my profs give a stirring challenge to us to give ourselves completely to the Lord in some particular area of life.  His message was convicting, but I recall several of us who were struggling through first-year New Testament Greek saying to each other, “I wonder what that verse really says in the original Greek?”

We weren’t really looking for a better understanding, but for an OUT.  As a teacher for the last 30 years of New Testament Greek, I can say that most times the Greek puts things even more challenging than our English Bibles!

1.  What’s one challenge you’ve found in the Bible that has made you think, “Wow.  Have I got some work to do!”

2.  Guilt has gotten a bad rap in today’s culture.  Granted, there is unbiblical guilt which is not healthy, is not built on God’s Word, and does not lead to life change.  But there is such as thing as biblical guilt.  Experienced any recently?  Why or why not? 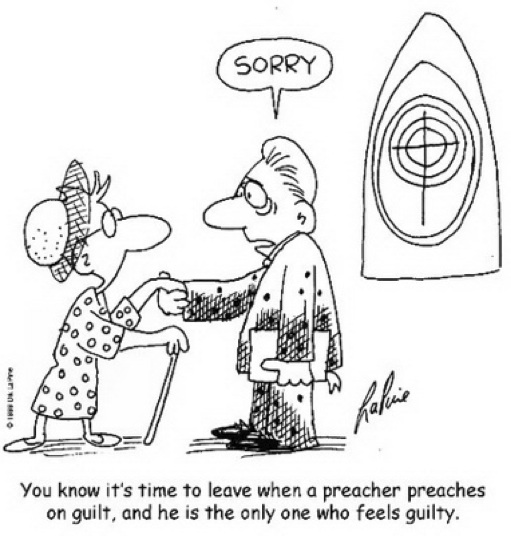 Posted by Dr. Larry Dixon on October 1, 2012 in preaching