Your thoughts or comments?

The Theology of Calvin . . . and Hobbes (Halloween Terror)

Anybody else worried about our world’s future? Your thoughts?

What Are Your Thoughts on Halloween? (John Piper)

What Are Your Thoughts on Halloween? (John Piper)

What are your thoughts on Halloween?

It’s kind of one of those questions of, “Do you see Christ against culture, Christ in culture, or Christ over culture?”

I would guess that at our church there would be people from one end of perspective to the other.

That is, some who say, “We don’t want anything to do with that demonic holiday! Why would you even be involved with that at all?” And others who would have their children dress up as a butterfly and go knocking on doors and say, “Trick or treat!” And then in the middle would be people who do counter events, like a thing at the church where you dress up like biblical characters and have a great time.

There isn’t much in my neighborhood. We’re kind of an inner-city neighborhood, and it’s not the most lucrative place to go knocking on doors. You’re not going to fill your bag up with the best. You better go to the suburbs if you want to get a good pile.

So I would hope that all Christians would think biblically and carefully about any holiday, any event, and how they might be salt and light in it. And if they feel like this can be of value to the kids in some way, to teach them—if it can be an innocent way of enjoying God’s grace and teaching lessons—so be it.

I’m willing to run the risk of attachment to worldliness in order to be biblically faithful in witness. The same thing with Christmas and birthdays and Easter and worshipping on Sunday. All of these things have pagan connections. 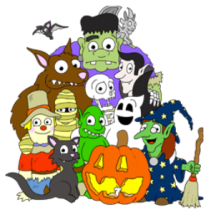 were not always what Halloween was all about. Unknown to most Americans, Halloween also has a Christian background despite its deepest roots being decidedly pagan.

Halloween is short for All Hallow’s Eve and marks the night before All Saints’ Day. Christians, in an effort to counter pagan rituals to death and evil spirits, created an alternative tradition – All Hallow’s Day on Nov. 1.

The tradition dates back to the time of the first Christian martyrs. According to third century historian Eusebius, second century Christian bishop Polycarp had kindly greeted and set a table of food for the soldiers who came to his house to arrest him in exchange for an hour to pray.

When Polycarp was taken to the coliseum he was pressed to denounce his faith, but instead said: “For eighty-six years, I have been [Christ’s] servant, and He has never done me wrong: How can I blaspheme my King who saved me?”

Polycarp, who was a disciple of Apostle John, was said to have been offering up prayers of faith and praise while people prepared to burn him alive.

Following his death, Christians gathered annually at Polycarp’s grave to remember his brave witness and gain courage through his example.

Gradually the day shifted focus to remembering all martyrs and the Church created the holiday to honor all of God’s saints in the seventh century.

In the 16th century, church reformer Martin Luther began the Reformation on Halloween, Oct. 31, 1517, by declaring that the church must return to the authority of God’s Word and to biblical doctrine.

However, modern Halloween has become a day associated with darkness and secularism. The Oct. 31 holiday is said to be only second to Christmas in terms of economic activity.

Halloween is responsible for some 4-6 billion dollars each year, according to “horror historian” David J. Skal. Halloween is also said to be the second most important party night in North America, according to historian Nicholas Rogers.

“Sure, go ahead and let the kids dress up like Batman and hit up your neighbors for candy,” wrote Chuck Colson, chairman and founder of Prison Fellowship Ministry, in a column on Halloween. “But when the hoopla of modern Halloween is over, encourage your kids to imitate some real heroes – not in what they put on, but in how they live their lives.”

A Gallup Poll this week found that 84 percent of Americans will spend money on costumes, decoration, or candy for Halloween, while only 16 percent say they will not spend anything. The average household spending for Halloween is $52 and rises to $82 for households with children under 18 years old, according to Gallup. (https://www.christianpost.com/news/halloween-the-unpopular-christian-story-29906/)

Time for a Great Cartoon! (Trick or treat)

Calvin, as he describes himself, is scary, isn’t he?  For his cynical, consumeristic, resource-consuming child, he puts his finger on some of the fears that grip all of us at times.

But this isn’t the only world that is.  Although Christians should care deeply about the earth, its resources, and its citizens, we are not to live as if this existence is all there is!

C.S. Lewis’ often-quoted statement helps us have a correct perspective:

“Aim at heaven and you will get earth thrown in. Aim at earth and you get neither.”
Leave a comment

Time for a Great Cartoon! (Trick or Treat?!)

Posted by Dr. Larry Dixon on September 20, 2015 in Halloween