UNLIKE JESUS! One Area Where Jesus-Followers Excel (Part 9)

None of us like criticism.  But criticism from those who profess to know God is especially painful.  Jesus (and John the Baptist) get criticized in Matthew 11.  John is throught to have been demonized because of his frugality (he wore a camel’s hair cloak and regularly ate a lunch of locusts).

The Lord Jesus is criticized for His indulgence.  He was charged with being a glutton and a drunkard, accusations which had no evidence to support them.  But He was also criticized for being “a friend of tax collectors and sinners.”  To this third charge, I believe, Jesus would have responded, “GUILTY AS CHARGED!”

We followers of Jesus need to be charged as well.  But the charge against most of us is that we are not like Jesus!  We eat Christian cookies, read Christian books, have Christian wallpaper, and hang around only with Christians!

There is a world of difference between being a “friend of the world” (James 4:4) and being “a friend of sinners” (Mt. 11).  One makes us enemies of God; the other makes us like the Lord Jesus.

We saw that THE MYTH OF GODLINESS is the commonly-held belief that the fewer non-Christian friends we have, the godlier we are.  No, the less like Jesus we are.  We saw from Jesus’ high priestly prayer in John 17 that He has strategically left us in the world to continue His work.  Believers in Jesus are not called to escape the world, but to serve Him, protected by God.  We are to be IN the world but not OF the world. (to be continued)

UNLIKE JESUS! One Area Where Jesus-Followers Excel! (Part 3)

We are focusing in this series of posts on our failure to truly follow Jesus in one specific area.  We read about that area in Matthew 11:

16 “To what can I compare this generation? They are like children sitting in the marketplaces 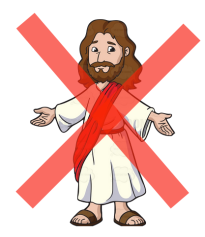 and calling out to others:

Jesus’ contemporary culture was acting like a bunch of children.  Both He and John the Baptist were being mocked for not dancing to their music.  Neither in joy nor sorrow did these two religious leaders measure up, conform to, what was appropriate and expected.

John the Baptist’s frugality was met

with the charge that he was demon-possessed!  That’s an incredibly serious accusation for someone living an abnormal lifestyle.  John did not calibrate his life around his appetites.  And he was thought to be ruled by the devil!

But Jesus goes on and speaks about how He was criticized.  He says, “The Son of Man came eating and drinking, and they say, ‘Here is a glutton and a drunkard, a friend of tax collectors and sinners.'”  Jesus’ indulgence seems to be the focus here.  He speaks of Himself as coming “eating and drinking.”  Jesus fully participated in His social surroundings.  He did not stand off to the side or on a holy hill condemning His contemporaries.  He joined them!