“Get Behind Me, Satan!” (a short video clip from John Ortberg

Posted by Dr. Larry Dixon on October 19, 2019 in following Jesus

Lonely? — Be a Friend of God! (A John Ortberg Clip)

Do you agree with Ortberg that we are often lonely but rarely alone? Could it be that loneliness can be a positive challenge to deepen our relationship with the Lord? Scripture gives examples of those who felt abandoned by God, who were painfully lonely, thinking the Lord had departed from them. If the Lord withdrew a sense of His presence from you, would you miss Him? Would I?

Ten Steps You Can Take to Make Your Sermons and Preaching Better! (Part 9)

“Humph! Who needs Hybels, Swindoll, Ortberg, and Brown — when you have ME?”

STEP NINE: LISTEN TO AND WATCH GOOD PREACHERS!
I love watching tennis on The Tennis Channel. My son-in-law is shocked that they have a whole channel devoted just to tennis. He is not a tennis player.

Why do I watch Raphael Nadal, Roger Federer, Novak Djokovic? It’s too late for me to become as good as they are in tennis. But I learn things as I watch them strike a cross-court topspin backhand or deftly lay a drop shot just over the net.

Excellent preachers are marked by certain characteristics, most of which we’ve tried to touch on in this booklet. They are well aware, as Walter Burghardt says in his book Preaching: The Art and the Craft, that “Life’s real enemy is not pain, not even death; life’s enemy is boredom.” They have excellent material and deliver it in attractive ways. As a friend of mine says, “Surely it must be a sin to bore God’s people with God’s Word.”

Pick a couple of preachers — they can even be TV preachers — and take notes on both their sermons and their presentation. What draws you to listen to them? What keeps you from changing channels? How are they encouraging involuntary listening in you?

One of my favorite preachers is Dr. John Ortberg of Meno Park Presbyterian Church in California. As a clinical psychologist, John peppers his sermons with secular studies on such issues as depression, cohabitation, and decision-making. His eye-contact is outstanding; his gestures complement his points. He is winsome and humorous and his messages are solid. I always learn something about living out the Christian life from John.

For years people have told me that my voice sounds just like Chuck Swindoll’s. I’m thinking about suing brother Chuck for impersonating me (just kidding). Swindoll is easy to listen to and his sermons are meaty and practical.

Bill Hybels encourages me to care more about lost people. He is not above shedding a genuine tear in his preaching. His practical illustrations and relevant application show why he is a favorite preacher for many.

My friend Stephen Brown (Key Life Network) is an outstanding communicator with a strong and deep voice. He has challenged me on many fronts, but I have been most affected by his wide use of illustrations.

You’re not trying to become the next John Ortberg, or Chuck Swindoll, or Bill Hybels, or Steve Brown. But you can learn from them. A lot. Become a student of those you respect and adapt their positive characteristics into your personality and style.

John Ortberg on What You Treasure Most!

I deeply appreciate Pastor John Ortberg’s passion and transparency. Do you see yourself as a mess?

When we think long and hard about our own lives, we must come to the same conclusions that we are self-destructive, other-destructive, God-ignoring, sin-chasing, temptation-flirting, time-wasting, Scripture-avoiding SINNERS!

True, if we have trusted Christ, we are new creatures. But the old nature, the old man, is ever present with us and he has not retired! We must fight sin with all the might God gives us. We must turn away from temptation with utmost ferocity. We must humble ourselves before the God-who-pardons and ask for strength not to be who we naturally are and oftentimes simply want to be.

May I suggest you (and I) begin this brand-new year with the resolution:  “I WILL ACKNOWLEDGE WHO I AM BEFORE GOD (both fallen and redeemed) AND WILL STRIVE TO RECOGNIZE AND TURN TO THE LORD DAILY FOR THE MESS THAT I AM.”

Posted by Dr. Larry Dixon on January 1, 2016 in christian life

How are you doing in “following Jesus”?

Do you love Him, trust, Him, admire Him?  Are you reading and re-reading His story, studying His teachings?  Are you actually seeking to do what He wants you to?

Isn’t prayer, in a sense, the asking of some of these

Wouldn’t it do us good to ask another believer every day, “Would you mind telling me how you are following Jesus today.”

Posted by Dr. Larry Dixon on October 12, 2015 in discipleship

Time for a Great Quote! (John Ortberg on the happy life)

“There’s something more important than the

Time for a Great Quote (John Ortberg on discouragement)

“God is never a God of discouragement. When you have a discouraging spirit

or train of thought in your mind, you can be sure it is not from God. He sometimes brings pain to his children — conviction over sin, or repentance over fallenness, or challenges that scare us, or visions of his holiness that overwhelm us. But God never brings discouragement.”
― John Ortberg

Posted by Dr. Larry Dixon on January 9, 2015 in discouragement

Sliding or Deciding? (a sermon clip on commitment – Ortberg) 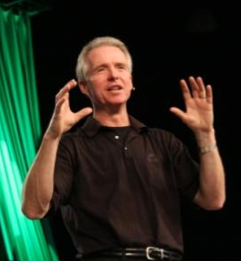 Posted by Dr. Larry Dixon on November 19, 2014 in commitment

“Get Thee Behind me, Satan!” (a sermon clip on FOLLOWING JESUS, John Ortberg)

Posted by Dr. Larry Dixon on November 2, 2014 in discipleship