Romans 15 says “For everything that was written in the past was written to teach us, so that through the endurance taught in the Scriptures and the encouragement they provide we might have hope.” (v. 4).  The book of Jonah was written for us!  And this book ends with a question we all ought to ponder.

To His servant who is furious that his comfort has been taken away and his prophesied judgment has not taken place, God makes a statement:  “You have been concerned about this plant, though you did not tend it or make it grow.  It sprang up overnight and died overnight.  And should I not have concern for the great city of Nineveh, in which there are more than a hundred and twenty thousand people who cannot tell their right hand from their left — and also many animals?”

Jonah’s concern was for his comfort.  He had no part in planting or assisting that shade plant in growing.  None of Jonah’s skills contributed even a little to that comfort-bringing vegetation.  The only skill Jonah showed in the book was his (finally) preaching to Nineveh, but his preaching was not out of his great concern for those lost people.

God’s concern was for the great city of Nineveh, a city with over a 120,000 children — and many animals!  Why would Jonah not recognize his misplaced concern?  Why don’t we?  (conclusion)

I heard one preacher say, “The world is so evil.  If I were God, I would have stomped the world to death by now.  Aren’t you glad I’m not God?”  Yes.  We are thankful for God’s mercy.  And He shows that mercy to His sun-burned, suicidal servant whose mantra seems to be “It would be better for me to die than to live.”

God asks His disgruntled missionary, “Is it right for you to be angry about the plant?” (v. 9).  Man was made in the image and likeness of his Creator and possesses a moral system, one aspect of which is his conscience.  But Jonah’s conscience does not appear to have kicked in throughout this book!

He responds, “It is right for me to be so angry that I wish I were dead.”  How should Jonah have responded?  He should have said, “Lord, I’m so sorry for valuing my comfort more than the souls of these Ninevites.  Give me another chance?”  (to be continued)

God is patient, isn’t He?  At dawn the next day we read of God’s action in providing something in addition to the leafy plant that gave Jonah welcomed shade.  God “provided a worm” (v. 7).  Worms are good for many things — scaring moms when one is young, baiting hooks to catch fish, aerating the soil.  This particular worm was created to . . . chew!  And it chewed the leafy plant to such an extent that the plant withered!

A loss of comfort.  How is Jonah going to respond?  Like Jonah, we are thankful for comfort when it comes — and sometimes outraged when it is taken away!  At sunrise, God provided one more item for His recipe of truth — a scorching east wind.  That wind and the sun “blazed on Jonah’s head so that he grew faint” (v. 8).

Again we read that Jonah “wanted to die.”  God’s servant is miserable.  He is ready to watch the show of judgment — and it doesn’t come.  He is enjoying several elements of God’s good creation — and they are taken away.  And now his head is getting sun-burned and his heart is white-hot angry with God.

Jonah’s ethical system kicks in and he says, “It would be better for me to die than to live.”  And then the Lord said, “Okay.”  And then he killed Jonah.  (Not really)  (to be continued)

Isn’t it just like the Lord to provide comfort for His people, even when His people are angry and anxious for God’s judgment — on others?  Jonah has settled into his shelter, enjoying its shade, waiting for God’s wrath to fall on Nineveh.

We read:  “Then the Lord God provided a leafy plant and made it grow up over Jonah to give shade for his head to ease his discomfort”! (v. 6).

God provides an additional level of comfort for Jonah beyond his self-made shelter.  God cares about His servant’s discomfort.  How ironic that the Lord would do such a thing for rebellious, unforgiving Jonah.

Then we read, “and Jonah was very happy about the plant” (v. 6).  An interesting study of this book would be the emotional life of Jonah.  What made him angry?  What brought him happiness?

But there he is.  In his double-shade, half provided by his own hands; the other half providentially provided by God the farmer.  But Jonah’s comfort, as he will see, is far from being a permanent condition.  (to be continued)

Again, no answer.  The Lord asked Jonah a question:  “Is it right for you to be angry?” (v. 4).  And he gave the Lord no answer.  Why not?  Well, it appears that Jonah had settled in for a show.  He had gone out and made himself comfortable at a place east of the city.

He made himself a shelter and, hope beyond hope, was waiting to see what would happen to the city.  He still had visions of destruction dancing in his head, wishing that God would again change His mind and bring the prophesied judgment to Nineveh.

We read that “he waited to see what would happen to the city.” (v. 5)  Why would Jonah expect God’s judgment to fall on repentant Nineveh?  ‘Cause he wanted that to happen!

We get things so mixed up, don’t we?  We ask for God’s mercy on those who don’t repent and want God’s judgment on those who do.  But God provides exactly what we need, as Jonah is soon to find out!  (to be continued) 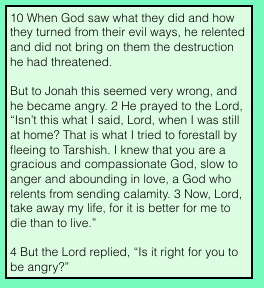 The Lord appeals to Jonah’s conscience in verse 4 after Jonah has had his temper tantrum.  The Lord asks, “Is it right for you to be angry?”  “Is it right?”  Hmmmm.   Jonah had set himself up as the final arbiter of right and wrong — and the God of the universe gently challenges him.

I just would have zapped Jonah and moved on to another missionary.  How about you?

But this God is indeed gracious and compassionate and slow to anger!  And He demonstrates those characteristics over and over again with Jonah.  Instead of rebuking Jonah for his suicidal ideations, the Lord raises the question of right and wrong.  The wrongs of Nineveh had gotten God’s attention and He had sent His emissary to pronounce judgment on the people.  But they had repented — and God had relented.  God chose to do what was right in HIS eyes. He withheld judgment.  And Jonah saw this as very wrong and was willing to die for his opinion.

A prayer for today:  “Lord, a big part of my fallenness is that I think I know better than You.  Thank You for not zapping me when I deserve to be zapped.  I praise You for Your patience, kindness, and mercy.  Help me to show the same to others today.  In Jesus’ name.  Amen.”  (to be continued)

Again Jonah wants his life to be over!  After affirming God’s grace, compassion, slowness to anger, and love, Jonah is ticked that God is not sending calamity on the people of Nineveh!  And he wants to die.  Again.

What a strange prayer request:  “Now, Lord, take away my life, for it is better for me to die than to live.” (v. 3).  If chapter one had Jonah attempt suicide by sailors, chapter four has Jonah attempting suicide by God!

“It is better for me” — How in the world did Jonah think he knew what was BETTER for him?  Perhaps this is one illustration of the consequences of Adam and Eve taking the forbidden fruit:  “The man has now become like one of us, knowing good and evil,” God said. (Gen. 3:22)  The test in the Garden was whether Adam and Eve would obey God rather than choose their own way.

Such autonomy produced devastating consequences.  Jonah, as one of Adam and Eve’s descendants, exhibits that autonomy by evaluating what he thought was “better.”  Watch out for those words in your own life — “It is better” — either thought or spoken out loud.  Who are you to decide?  (to be continued)

Posted by Dr. Larry Dixon on September 4, 2017 in Uncategorized

Never were such orthodox words spoken with such animosity and fury:  “I knew that you are a gracious and compassionate God, slow to anger and abounding in love, a God who relents from sending calamity”!

Jonah knew the character of his God — and God’s character made him furious!  He knew that if he had gone to Nineveh in the first place, his God would give the Ninevites the chance to repent, be forgiven, and not be annihilated.  He knew that.  And that’s why he fled.

Jonah does not cover up his anger with religious jargon or polite platitudes.  He rails at the Lord for being . . . the Lord!  And in the process of his rant, Jonah says some important things about God:

(1)  He is a gracious and compassionate God;

(2)  He is slow to anger and abounding in love;

(3)  He relents from sending calamity.

Those are some incredible attributes of the God of creation.  Laudable attributes.  But not to Jonah.  And certainly not now.  (to be continued)

Posted by Dr. Larry Dixon on September 3, 2017 in Uncategorized

“But to Jonah this seemed very wrong . . .”  Jonah is morally outraged that God would forgive the Ninevites!  Jonah is elevating his sense of morality above God Himself!  He is the one doing the judging — and he’s judging GOD!  And Jonah’s certainty that God has made a huge mistake leads Jonah to become furious with the Lord.

What do you do when you are furious?  Maybe throw a temper tantrum (as we saw in our last post).  Maybe go and sulk in the corner somewhere. Not Jonah.  He prays!  He speaks to the Lord and he voices his disgust at God’s decision not to judge the Ninevites.

What is the content of Jonah’s prayer?  “Isn’t this what I said, Lord, when I was still at home?”  So, Jonah apparently talked to the Lord when he first got his assignment to go to Nineveh.  Jonah chapter 1 doesn’t give us details of that conversation, and maybe Jonah means something like “that is exactly what I thought when I was still at home.”

Posted by Dr. Larry Dixon on September 2, 2017 in Uncategorized

Can you imagine getting mad at God for forgiving someone else?!  What about the rape victim who learns that her rapist trusts Jesus in prison and is now a brother in the faith?  What about a terrorist on death row who realizes that Islam isn’t the truth of God, hears the gospel, and repents of his actions that led to the death of hundreds?  What about your snarky neighbor who’s always borrowing your tools but never returning them?  (This last one does seem a bit silly, doesn’t it?)

But we struggle with God’s forgiving others, don’t we?  Especially if they have offended us. 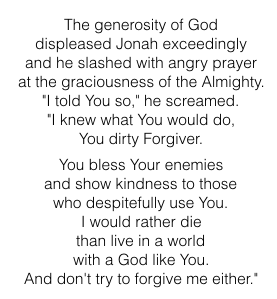 Posted by Dr. Larry Dixon on September 1, 2017 in Uncategorized