Man, does time fly when you’re preparing for a conference!  Those of you who follow this blog know that I have the opportunity to speak at Emmaus Bible College’s “Christian Ministry Seminars” on February 6-7.  By the time you read this, the conference is over and I’m back home in South Carolina.  (I’ll post a follow-up report as soon as I can).

My theme for the conference is

“Anti-Intellectualism Isn’t Spirituality.”  We are to love God with our minds, Jesus says, and I’m trying to investigate various aspects of what that means.

In our last post on this topic, we looked at the Matthew 16 text where Jesus essentially says, “You know how to predict bad weather and to cancel your synagogue picnic.  Use your same reasoning powers to come to the proper conclusion about ME!”

But their own wickedness and spiritual adultery, Jesus says, short-circuits the thinking process.

Jesus, it seems unnecessary to say, was a master logician.  He used His human mind to defend His disciples, challenge His opponents, and press home His claims to those who eventually had Him crucified.  One of the most fascinating aspects of Jesus’ use of His mental faculties is the issue of logical fallacies.  A logical fallacy is, roughly speaking, an error of reasoning.

Some notable logical fallacies are the following:  ad hominem:  an argument that seeks to discredit a position by discrediting those who hold them (Example:  “That viewpoint can’t be true.  After all, he’s a liberal!”).  The red herring is a fallacy of distraction, and is committed when a listener attempts to divert an arguer from his argument by introducing another topic (Example: “You may think

that he cheated on the test, but look at the poor little thing! How would 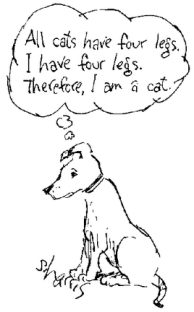 he feel if you made him take it again?”).  argumentum ad baculum:  An appeal to force is an attempt to persuade using threats. Its Latin name, “argumentum ad baculum”, literally means “argument with a stick” (Example:  (1) If you don’t accept that the Sun orbits the Earth, rather than the other way around, then you’ll be excommunicated from the Church.  Therefore: (2) The Sun orbits the Earth, rather than the other way around).  A straw man argument is one that misrepresents a position in order to make it appear weaker than it actually is, refutes this misrepresentation of the position, and then concludes that the real position has been refuted (Example: (1) Trinitarianism holds that three equals one. (2) Three does not equal one. Therefore: (3) Trinitarianism is false. This is an example of a straw man argument because its first premise misrepresents trinitarianism, its second premise attacks this misrepresentation of trinitarianism, and its conclusion states that trinitarianism is false. Trinitarianism, of course, does not hold that three equals one, and so this argument demonstrates nothing concerning its truth. (Taken from http://www.logicalfallacies.info/).

Some of you right now might be saying “this hominem‘s head hurts and I feel like going out and eating some red herring!”  We will look at several examples of logical fallacies — and how the Lord Jesus responded to them — in our next post. (to be continued)

Posted by Dr. Larry Dixon on February 16, 2017 in loving God with our minds

How do you know when to postpone or even cancel your church (or synagogue) picnic?  You might check weather.com or look at Farmers’ Almanac or notice a twinge in your shoulder that a bad storm is on its way.

“Christian Ministry Seminars” on February 6-7.  My theme is (was) “Anti-Intellectualism Isn’t Spirituality.”  By the time you read this, the conference will have taken place.

But I digress.  Jesus Christ, the 2nd Person of the Trinity, is our model in loving God with our minds.  He commanded faith “like a child” not childish faith.  And on the matter of weather, notice what He says in Matthew 16:

Jesus clearly advocates the use of one’s reason in determining whether or not to hold the scheduled synagogue picnic.

He says that you Pharisees and Sadducees use your cognitive powers to observe the sky and draw certain conclusions.  He does not challenge them to simply flip a coin, but to use their minds to come to specific decisions.

He says you know how to make prognostications about the weather, but are unable (or unwilling) to objectively look at the evidence for His Messiahship and come to the appropriate conclusion.

Jesus reminds them that man’s sinfulness has affected

his mental ability.  “A wicked and adulterous generation looks for a sign,” He says.  Man’s fallenness has impacted his God-given skill of drawing rational conclusions.  Wickedness and spiritual adultery affect one’s intellectual process.

Rather than giving the Pharisees and Sadducees a sign (although He does predict His own resurrection), He gives them a brief sermon on how their sin inhibits their ability to love God with their minds and affirm His as the Promised Messiah.  Such mental short-circuiting affects people today.  But we should still look for ways to appeal to them on an intellectual basis.  And that’s part of what it means to love God with our minds! (to be continued)

Posted by Dr. Larry Dixon on February 12, 2017 in loving God with our minds