Posted by Dr. Larry Dixon on September 9, 2019 in jealousy

Requiem for a Pounded Cat

Buddy, a tabby adopted from a local shelter, lived with us for eleven years. 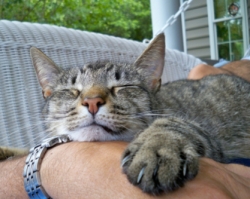 In fact, our daughter Amy  brought this absolutely adorable kitten home to us despite our objections.  You see, we had just lost our entire house to a house fire and were living in a rental house provided by our insurance.

When “Buddy” came “to visit for the weekend,” we (mostly me, Larry) fell in love with this little guy who tore across our furniture and majored on looking cute.  For that weekend. (see picture at right). PICTURE OF KITTEN

We recently received an angry phone call from the neighbor behind us.  Apparently, Buddy had become the neighborhood bully, even going up on our neighbor’s deck and beating up her cat.  I don’t know if her cat needed to be beaten up, but I believed our neighbor and promised I would take care of it.  (I was not sure at all sure what “taking care of it” meant).

Within an hour an Animal Control officer came to our home and issued me a ticket for, are you sitting down?, $1092.34.

You read that right.  Over a thousand dollar fine for not having our cat registered in our county.  He said I could get out of going to court and paying that ticket IF I got my cat registered and IF my cat no longer beat up other neighborhood cats.

How do you promise that your cat won’t beat up other cats?  If our wonderful Buddy had scratched our neighbor, I learned later, she could have taken us to court and sued us.

I thought about behavior modification therapy for Buddy, but he was unwilling to be educated into proper feline behavior in our neighborhood.  We kept Buddy indoors for a few days (he normally

loves to run around outside, probably to fulfill mob hits for some cat gang), and he was beside himself.  I was told by others: “Of course, he’s a feral cat!”  (I had to look up the word “feral.”)

adjective
1.
existing in a natural state, as animals or plants; not domesticated or cultivated; wild.
2.
having reverted to the wild state, as from domestication: a pack of feral dogs roaming the woods.
3.
of or characteristic of wild animals; ferocious; brutal.
At least a few of those adjectives described Buddy, unfortunately, so we tried to have someone adopt him.  Anyone.  No one stepped up.  I think one of the hardest things in life is getting your pet adopted by someone else.
That brings us to the pounding.  I didn’t pound Buddy, but I did have to take him to a local animal shelter.  We could not longer keep him.  We couldn’t risk his attacking our neighbor (who seems to be a nice great grandmother) or her cat (who may or may not deserve to be whacked).  It was actually quite sad.

My only consolation is that I choose to believe that Buddy was adopted by a farmer who wanted a hit cat who could take out mice and then snuggle with you when you watch a movie.  It was a good eleven years.  RIP, Buddy.
8 Comments 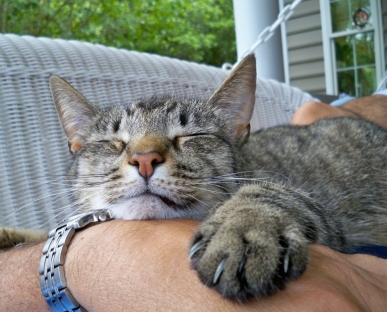 My cat Buddy has taught me — and is teaching me — a few lessons about life.

1.  It’s important to be loved by somebody.

2.  Contentment is worth its weight in gold.

3.  Life is too short to complain all the time.

5.  Having someone to trust completely lets me close my eyes and not worry about a thing.

7.  There are times when I look pretty good in some pictures.

8.  My life seems happier when the dog is asleep or in the house (when I’m on the front porch with my master).

9.  The joy I give others is worth the shed hair I leave behind.

10.  I may look like I’m dozing, but my ears are operating at peak efficiency and I can move in an instant to spring into action, but right now I’m pretty relaxed and enjoying life.  You?