As we are right in the throes of election season, Calvin’s words ought to frighten us! We need leaders we can trust! Thank the Lord, we can trust HIM! HE is the One who guides governments and controls history! Pray for your government leaders today — and for those who will be our leaders tomorrow!

On Becoming Seventy! A Few Reflections (Part 6 of 7) T=TRUSTING!

But it’s also my birthday. My 70th birthday. And as it approaches, I want to think about a couple of issues before it is “here.”

Linda and I are in the stage where TRUSTING the Lord has become very real. And sometimes quite difficult. When our children (or our grandchildren) face challenges, we want to rescue them, fix all their problems, help them (with godly advice, of course) to overcome all their obstacles. but sometimes all we can do is . . . TRUST.

So, after almost 49 years of marriage, we are getting much more serious about praying together. So after we’ve both had our coffee in the morning, we sit on our couch and we pray. We lift up our children and their families to the One Who is worthy of our TRUST. But it’s a lot easier to give advice (when it’s not asked for) or to worry in silence about circumstances and situations. I’m not sure it’s easier to TRUST when one gets older, but, in some sense, the options get more limited as time goes on.

Would you pray this prayer with me? “Lord Who Is Worthy of My Trust, please forgive me for relying way too much on my wisdom, foresight, advice. Help me and my wife to TRUST You in all circumstances ‘as long as we both shall live.’ In Jesus’ name. Amen.”

David’s presence in the Philistine army is questioned by some of the commanders. They fear that David will turn against them in fighting the Israelites and they even cite the ditty about Saul slaying his thousands and David his tens of thousands” (v. 5).

Achish calls David in, affirms that he has been reliable and says that he has found no fault in him, “but the rulers don’t approve of you.” He asks him to turn back and go in peace and not to do anything to displease the Philistine rulers (v. 7).

David pleads to stay and to fight “the enemies of my lord the king” (v. 8). Achish says David has “been as pleasing in my eyes as an angel of God” (v. 9). But Achish insists David and his men leave at dawn. And they do.

Some takeaways for me:

This text is a bit difficult for me to find any practical application. David has been

engaged in a ruse, a deceit in which he and his men have been attacking Philistine outposts, killing everyone there, even though he is in King Achish’s army!

Strategy and deceit in wartime is expected, but I don’t believe I’m to live a life of deception and lies.

This chapter may well fit into the category of description rather than prescription. In other words, we are simply being given an accurate story of David here and his example is not to be followed by us.

“Trust Us!” (Too Little Information!)

Okay. Okay.  It might have been staged.  I don’t know. One hopes there were pillows on the floor in front of him!

He needed a bit more direction, didn’t he?  He should have been told to “fall backwards!”, right?

We ought to be very cautious in giving our trust to just anyone!  One of the great things I love about the Christian life is that it is not blind faith in Someone we have not seen without any evidence!

Words . . . and . . . works. How does one relate to the other? Jesus is given a great opportunity to rescue His friend Lazarus from death. And He chooses not to.

Instead He speaks words. The One who came to heal the sick and raise the dead is, apparently, deciding to do the latter rather than the former.

Now a man named Lazarus was sick. He was from Bethany, the village of Mary and her 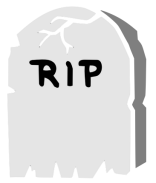 sister Martha. 2 (This Mary, whose brother Lazarus now lay sick, was the same one who poured perfume on the Lord and wiped his feet with her hair.) 3 So the sisters sent word to Jesus, “Lord, the one you love is sick.”

4 When he heard this, Jesus said, “This sickness will not end in death. No, it is for God’s glory so that God’s Son may be glorified through it.” 5 Now Jesus loved Martha and her sister and Lazarus. 6 So when he heard that Lazarus was sick, he stayed where he was two more days, 7 and then he said to his disciples, “Let us go back to Judea.”

8 “But Rabbi,” they said, “a short while ago the Jews there tried to stone you, and yet you are going back?”

9 Jesus answered, “Are there not twelve hours of daylight? Anyone who walks in the daytime will not stumble, for they see by this world’s light. 10 It is when a person walks at night that they stumble, for they have no light.”

Jesus is being summoned to action and instead He stays and makes a speech.  He delivers an astounding prediction: “This sickness will not end in death.” (v. 4). There are at least two ways that a sickness, a serious sickness, won’t “end in death,” it seems to me: (1) The sickness is cured; (2) the person dies but doesn’t stay dead. Death is not the final result; it isn’t the conclusion of the matter. Jesus didn’t say that Lazarus wouldn’t die. He said “This sickness will not end in death.”

Let’s think for a moment about the amazing declaration Jesus makes. “This sickness will not end in death. No, it is for God’s glory that God’s Son may be glorified through it.”  Only God can authoritatively declare why something is occurring.  We know so little.  Our insight is so narrow, so time-bound, so polluted by circumstances and feelings.  But God can say why something, something terrible, is taking place.  He may not always tell us why, but He knows.  And the fact that we don’t know doesn’t make the moment or experience we’re going through meaningless.

Psalms of the Salter: Some Thoughts on Really Living for the Lord (Psalm 119): Part 18 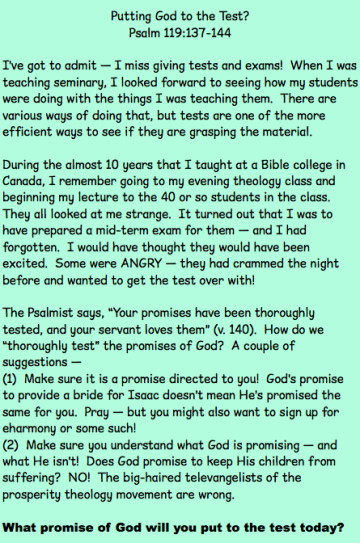 and your laws are right.
138 The statutes you have laid down are righteous;
they are fully trustworthy.
139 My zeal wears me out,
for my enemies ignore your words.
140 Your promises have been thoroughly tested,
and your servant loves them.
141 Though I am lowly and despised,
I do not forget your precepts.
142 Your righteousness is everlasting
and your law is true.
143 Trouble and distress have come upon me,
but your commands give me delight.
144 Your statutes are always righteous;
give me understanding that I may live.

Psalms of the Salter: Some Thoughts on Really Living for the Lord (Psalm 119): Part 7

49 Remember your word to your servant, 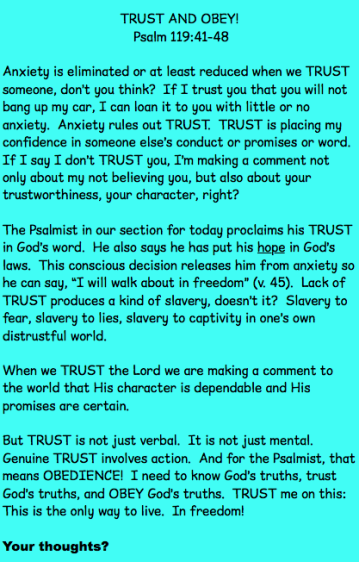 for you have given me hope.
50 My comfort in my suffering is this:
Your promise preserves my life.
51 The arrogant mock me unmercifully,
but I do not turn from your law.
52 I remember, Lord, your ancient laws,
and I find comfort in them.
53 Indignation grips me because of the wicked,
who have forsaken your law.
54 Your decrees are the theme of my song
wherever I lodge.
55 In the night, Lord, I remember your name,
that I may keep your law.
56 This has been my practice:
I obey your precepts.

Psalms of the Salter: Some Thoughts on Really Living for the Lord (Psalm 119): Part 6

41 May your unfailing love come to me, Lord, 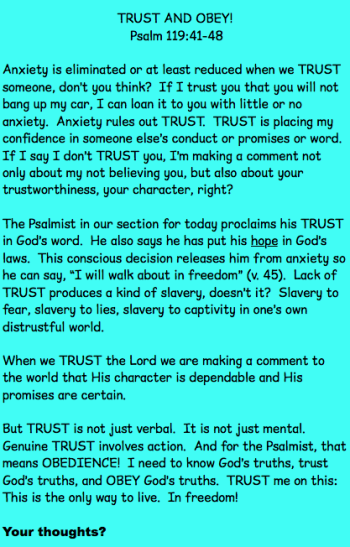 your salvation, according to your promise;
42 then I can answer anyone who taunts me,
for I trust in your word.
43 Never take your word of truth from my mouth,
for I have put my hope in your laws.
44 I will always obey your law,
for ever and ever.
45 I will walk about in freedom,
for I have sought out your precepts.
46 I will speak of your statutes before kings
and will not be put to shame,
47 for I delight in your commands
because I love them.
48 I reach out for your commands, which I love,
that I may meditate on your decrees.

Three Prayers to Pray Everyday in 2017 – A Sermon by Dr. Roy King

Roy’s message really hit home with me when we visited Sandhills Community Church last Sunday.  Roy and I (and two other faculty) were released from our positions at Columbia International University last summer — and the journey into the next chapter has been hard.  The Lord has been good in so many ways.  But the journey has been hard.  Roy gives exceptionally practical advice as he reflects on his “career change.”

Posted by Dr. Larry Dixon on January 9, 2017 in prayers for the New Year