Tag Archives: ways of the world

We are thinking about Sunday School class at Cedarcroft Bible Chapel on January 27.  The passage will be Ephesians 2:1-10 and we have already noticed the following:

1. If we think about WHAT WE WERE B.C. (before Christ), verse 1 says we were “dead in [our] transgressions and sins.” The word “transgression” (παράβασις) literally means “a going aside, overstepping, deviation” and comes from two words meaning “contrary” and “to go.”

We were dead in our overstepping, our deviation, 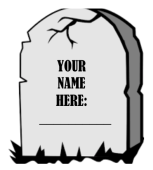 4.  And we usually don’t think that dead men FOLLOW anyone or anything!  They are dead.  But the text says we “followed the ways of the world and of the ruler of the kingdom of the air” (v. 2).  We not only followed WAYS — we followed a PERSON!  Who is that person?

He is called “the ruler of the kingdom of the air” and “the spirit who is now at work in those who are disobedient” (v. 2).  That’s none other than SATAN!

Jesus spoke often of the devil and once said to the religious leaders, “You aren’t following your father Abraham — you belong to your father, the devil, and you want to carry out your father’s desires. He was a murderer from the beginning, not holding to the truth, for there is no truth in him. When he lies, he speaks his native language, for he is a liar and the father of lies.” (John 8:44).

It is a sobering truth that each of us comes into this world, not as children of God, but as children of the Evil One.  And only the GOSPEL can rescue us “from the dominion of darkness and [bring] us into the kingdom of the Son he loves” (Col. 1:13).

Today’s Prayer:  “Father, thank You for the sobering truth of my BEFORE CHRIST condition.  Teach me not to follow the ways of the world or give any of my allegiance to the Evil One!  I praise You for rescuing me from my transgressions and sins!  In Jesus’ name.  Amen.”

Tags: ephesians 2, the devil, ways of the world, worldliness