With Friends Like These . . . Job’s Friends and Religious Foolishness (The Historicity of Job)

One of the most fundamental questions regarding the book of Job is its historicity. Is this a book about a real person? Is it an epic fable? What do the rest of the Scriptures teach us about the person of Job?

1. The book of Job itself. The book begins with the words, “In the land of Uz there lived a man whose name was Job. This man was blameless and upright; he feared God and shunned evil. 2 He had seven sons and three daughters, 3 and he owned seven thousand sheep, three thousand camels, five hundred yoke of oxen and five hundred donkeys, and had a large number of servants. He was the greatest man among all the people of the East.“

This is not a story on the level of the wizard of Oz. Job is from the land of Uz, not Oz! It would be worth investigating if there has been any archaeological evidence found for “the land of Uz.” But there are many locations in the Bible for which we have not yet found physical evidence. So, that means nothing.

This introductory paragraph is written in such a way that it intends to be understood as historical. Job is located in a physical place — “the land of Uz.” Job’s moral character is immediately highlighted, for it is a pivotal question throughout the book. We read that “This man was blameless and upright.” Now, it may well be that Job wrote this book himself, but it reminds one of another book (one written by Moses) in which Moses writes the following words: “Moses was very humble, more than any man who was on the face of the earth.” (Numbers 12:3). The fact that the writer himself testifies to his own godly character does not negate the truth of that description.

Religiously, we learn that this man Job “feared God and shunned evil.” Job’s fear of the Lord and his moral conduct will be repeatedly questioned by his good friends over thirty chapters of “counseling.” The book begins by setting the moral stage for the coming drama in Job’s life.

We are then informed about Job’s family: seven sons and three daughters (v. 2). It is fascinating that his wife is not mentioned here. When she enters the story later it is anything but complementary to her. This is the story of a real man, located in a real place, of outstanding moral and spiritual quality, with ten real children.

Job could not handle all those 11,500 animals by himself, so we learn of his “large number of servants” (v. 3). Most of those servants will lose their lives in Job’s tragic story. But these were real people with real jobs and real families. And real funerals.

The book of Job itself gives the direct declaration that Job “was the greatest man among all the people of the East” (v. 3). Again, this sure sounds like the beginning of an historical narrative in real space and time.

2. Other Scriptural Evidence about Job

Does the Word of God anywhere refer to Job and his trials? Absolutely! In Ezekiel 14 we read of God charging Israel with deserting the Lord, replacing Him with their idols. Ezekiel is commissioned with commanding the people to repent and turn from their idols (v. 6). God promises to judge those who “set up idols in their hearts” (v. 7) and will remove them from God’s people. This act of judgment, the Lord says, will cause people to “know that I am the Lord.” (v. 8). Prophets who utter a supportive prophecy of Israel’s idolatrous practices will be destroyed “from among my people Israel” (v. 10). Such judgment will cause the people of Israel to no longer stray from the Lord and He will once more “be their God” (v. 11).

We then read that if a country sins against the Lord, He will cut off its food supply and send famine upon it and kill its people and their animals. Ezekiel then writes, “even if these three men — Noah, Daniel, and Job — were in it, they could save only themselves by their righteousness” (v. 14).  The Lord then says that if He were to send wild beasts throughout the country and they leave it childless so that no one can pass through it because of the beasts, “as surely as I live, declares the Sovereign Lord, even if these three men were in it, they could not save their sons or daughters. They alone would be saved, but the land would be desolate” (vv. 15-16).

The text goes on to describe the possibility of the Lord’s bringing a sword against His people and His saying, “Let the sword pass throughout the land” to kill its people and their animals (v. 17). We are told once again the words, “as surely as I live, declares the Sovereign Lord, even if these three men were in it, they could not save their own sons or daughters. They alone would be saved.” (v. 18).

The Lord then threatens a plague to pour out His wrath and to kill its people and their animals (v. 19). We then read, “as surely as I live, declares the Sovereign Lord, even if Noah, Daniel and Job were in it, they could save neither son nor daughter. They would save only themselves by their righteousness.” (v. 20).

What have we seen in this Ezekiel passage? The Lord’s hatred of idolatry is clearly expressed and He threatens four different kinds of punishment on His own people: (1) famine (v. 13), (2) wild beasts (v. 15), (3) the sword (v. 17), and (4) a plague (v. 19). Each of the threatened kinds of punishment is concluded by the expression “even if these three men were in it, they could not save their own sons or daughters. They alone would be saved.” Who are “these three men“? Threat number one and threat number four make it quite clear that these three men are none other than Noah, Daniel, and Job. If Noah and Daniel were historical figures, then it logically follows that Job was as well.

We receive one other reference to Job — and that in the New Testament. In the book of James we read, “As you know, we count as blessed those who have persevered. You have heard of Job’s perseverance and have seen what the Lord finally brought about. The Lord is full of compassion and mercy.” (5:11).

The passages we saw in Ezekiel 14 referred not to Job’s trials, but to his godliness. In fact, he was a member of what we could call The Holy Three. The other two members were Noah and Daniel. And the point of referring to those three godly men was that their righteousness would only save them, and no one else, from the wrath of God.

Here in James the allusion to Job is to his perseverance in his trials. James makes the point that his audience was acquainted with the story of Job’s steadfastness in enduring his sufferings sent by the Lord. And James adds that the conclusion of the Job story is something that “the Lord finally brought about.” James’ use of the word “finally” is interesting because reading the extended story of Job’s sufferings is, indeed, painful. And the reader longs for his testing to be concluded. James clearly affirms the historicity of Job to make the critical point that “the Lord is full of compassion and mercy.”

Does It Really Matter?

Some point to the fantastic scenes early in the book of Job between God and Satan and thus wish to see Job as a religious parable with a moral message. But the Bible is full of fantastic scenes of God interacting with His people in space/time history.

So we will be treating the book of Job as an historical account of an incredible life filled with suffering, profound and unedited questions, and real friends who thought they were helping their broken and afflicted friend.

Tags: historicity of Job, history, the book of Job

The Theology of Calvin . . . and Hobbes (Reality)

With Friends Like These . . . Job’s Friends and Religious Foolishness (√An Overall Outline of the Book)

Friends: As we dive into this incredible book, it might be helpful to get a kind of bird’s-eye view of the book of Job as a whole. Here’s a basic outline which we will follow:

VIII. The Exhortations of Eliphaz: Round Two (Ch. 15)

Zophar only has two rounds!

XIV. The Exhortations of Eliphaz: Round Three (Ch. 22)

XVI. The Badgering of Bildad: Round Three (Ch. 25)

Tags: outline, the book of Job

The Theology of Calvin . . . and Hobbes (Truth)

With Friends Like These . . . Job’s Friends and Religious Foolishness (A Few Notes on Unit-Reading)

Friends: I just unit-read the book of Job and it took just a little bit over an hour. Here are a few notes that I took as I read. I would be very interested in seeing any notes that you’ve made as you’ve unit-read the entire book! 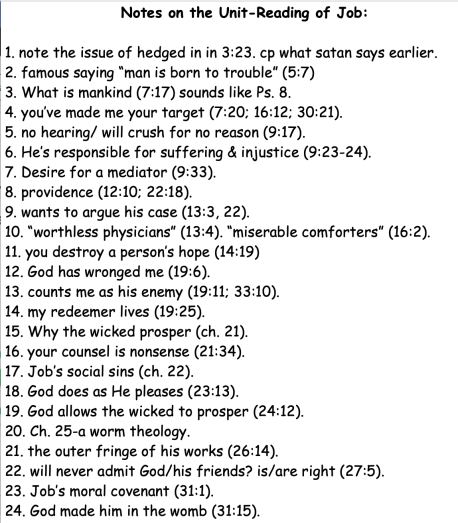 Tags: the book of Job, unit-reading

The Theology of Calvin . . . and Hobbes (Social Responsibility)

With Friends Like These . . . Job’s Friends and Religious Foolishness (Introduction)

Friends: I want to begin a series on the book of Job. In looking over my posts, I just realized that I dealt with this subject back in 2014! But I’m hoping that this series of posts will eventually become my next book. So, please read my posts and provide any comments or questions that you have.

My next post will give a few reflections on what I’ve seen in trying to take in the book as a whole.

Posted by Dr. Larry Dixon on December 1, 2022 in Uncategorized

A Dozen Questions Worth Considering (Psalm 62).

The Theology of Calvin . . . and Hobbes (Prayer)

The Wisdom of C.S. Lewis (Quotes from Brian Sibley’s Book): The Still Point of History

“A man who was merely a man and said the sort of things Jesus said would not be a great moral teacher. He would either be a lunatic—on a level with the man who says he is a poached egg—or else he would be the Devil of Hell. You must make your choice.“ (from Mere Christianity)