Now, I’ve not been told that I only have six months to live, but what if 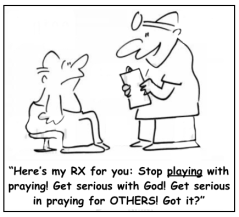 that were true? What would I do for the next six months? How would my life change? What priorities would take center stage in my life? How would such news impact my relationship with others — my unsaved friends, my fellow Christians, my wife, my children and grandchildren?

The spiritual discipline that I probably struggle the most with is . . . PRAYER! I think of prayer as a kind of last-resort-passive-practice when I can’t solve my own problems. It seems I have God on speed dial and His only number is 911.

Pastor John Piper puts it this way: “One of the

great uses of Twitter and Facebook will be to prove at the Last Day that prayerlessness was not from lack of time.”

Mind if I give you an assignment? Study one of the great prayers of the Bible (the Apostle Paul has some fantastic ones in his epistles). Make a note below in the Comments’ section which prayer you studied. How would your prayer life change if you prayed like that? [I’ve studied Paul’s prayer in Colossians and you can access that prayer here.]

Some Thoughts about Church Membership – Part 5

“Well, I guess we’ll just have to pray about it!”  How often have you said (or, at least, thought) those words?  I’m embarrassed to say that one of my weakest Christian disciplines is . . . PRAYER!

We’re thinking about the issue of church “membership.”  I’ll be preaching at Cedarcroft Bible Chapel in New Jersey the two Sundays of September 30th and October 7th.  The elders have asked me to draft a proposal about a more strategic process of church membership.

As we look at the early church, we don’t uncover

ancient church membership roles, but we do find specific principles and priorities which marked those believers.  They were not mere attenders.  They were dedicated to four specific goals which they consistently practiced.  We learn of their deepest concerns in Acts 2:41-42.  Here’s the text for our consideration.

We have seen their emphasis upon biblical doctrine and their concern for genuine fellowship with one another. We’ve also considered the great value they placed on worship (“the breaking of bread”).  Let’s notice their fourth priority which is —

This was not my professor.

When I was a first-year Bible college student, one of my professors gave a wonderful lecture on the Christian discipline of prayer. He was not a real approachable teacher, but I gathered my courage about me, caught up to him after class, and said, “Mr. __, I really appreciate what you said about prayer. In fact, I’m going right over to the bookstore and buy a large spiral notebook and I’m gonna’ start studying all the prayers of the Bible from Genesis to Revelation!” He looked at me and said, “Hmmpf. I think you’d be better off just praying.” And then he walked off. But he was right.

Why do I find prayer so difficult? Part of my problem is that prayer seems to me to be passive, a last resort alternative, the farthest thing from being proactive that I can think of. Maybe I do need to study biblical prayers, for I would soon learn that the prayers of God’s people have stopped the rain (Elijah, James 5:17-18), opened prison doors (Peter, Acts12:12ff), prevented God from wiping out a nation (Moses, Num. 11:1-3; 21:7; Deut. 9:23-29), kept God from dispensing justice to some incredibly foolish counselors (Job 42:7-9), etc.

My problem, and yours too I suspect, is that I look at prayer wrongly. I either view it

in a cosmic vending machine way (we insert prayers as if they were coins, pull the handle, and wait for God to deliver our selection), or in a monastic grit-your-teeth discipline way (we pray because God commands us to – that’s all the reason we need), or as something religious to do when all our efforts at solving a problem have had little success (“Well, we’d better call God into this mess! We’ve done everything humanly possible!”). We seem to have God on speed dial, but His only number is 911.

When I fail to spend significant time conversing with the God I cannot see, part of my problem may be that I am walking by sight, and not by faith! The Christian life demands that we talk to Someone we cannot see, Someone who normally will not audibly speak back to us, Someone whom we must believe is there, especially when all evidences of His presence seem to be missing. We are to walk by faith, meaning that we take His promises in His written Word seriously. His Word says, “This is the confidence we have in approaching God: that if we ask anything according to his will, he hears us. And if we know that he hears us – whatever we ask – we know that we have what we asked of him” (1 John 5:14-15). I either believe that passage of His Word – or I don’t.

The first Century Christians devoted themselves to prayer. They gave themselves to systematic, strategic, heart-changing, energizing communication with the Creator. Prayer is God’s gift to straighten out a messed-up Christian like me. What do you think? Am I alone in this struggle? (from the book DocWALK: Putting into Practice What You Say You Believe, pp. 170-172). (to be continued)

Posted by Dr. Larry Dixon on September 5, 2018 in church membership

A maskil of David. When he was in the cave. A prayer. 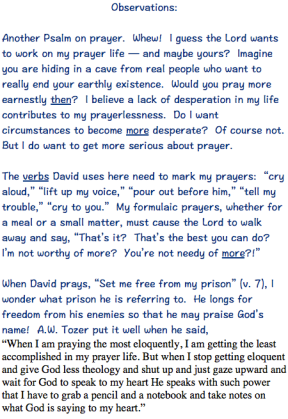 I lift up my voice to the Lord for mercy.
2 I pour out before him my complaint;
before him I tell my trouble.

3 When my spirit grows faint within me,
it is you who watch over my way.
In the path where I walk
people have hidden a snare for me.
4 Look and see, there is no one at my right hand;
no one is concerned for me.
I have no refuge;
no one cares for my life.

6 Listen to my cry,
for I am in desperate need;
rescue me from those who pursue me,
for they are too strong for me.
7 Set me free from my prison that I 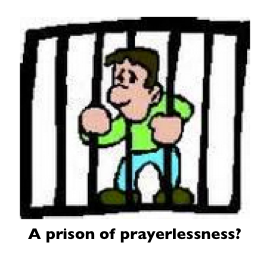 may praise your name.
Then the righteous will gather about me
because of your goodness to me.

Posted by Dr. Larry Dixon on December 3, 2015 in the book of Psalms

Time for a Great Quote! (Piper on Prayerlessness)

that prayerlessness was not from lack of time.”
― John Piper

Posted by Dr. Larry Dixon on November 21, 2014 in prayerlessness